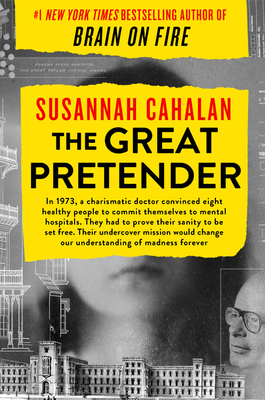 By Susannah Cahalan
for information about purchasing this book, please contact orders@bookpassage.com

In 1973, Stanford psychologist David Rosenhan convinced seven sane individuals to join him in committing themselves to mental hospitals to test the legitimacy of psychiatry’s labels. They were forced to remain inside until they’d “proven” themselves sane. All eight emerged with alarming diagnoses and troubling stories of their treatments, hastening the closure of such institutions and changing the field of mental health diagnosis permanently. Yet as New York Times-bestselling author Susannah Cahalan shows in her compelling work of narrative nonfiction, very little in this saga is exactly as it seems. An extraordinary piece of investigative work, The Great Pretender not only exposes a startling mystery that lay hidden in plain sight for nearly fifty years, but also offers a searing look at a culture in which a single experiment could change the course of modern medicine.

“Susannah Cahalan, the bestselling author of Brain on Fire, is back with another riveting true story of madness and the mental health system. In the 1970s, Dr. David Rosenhan convinced seven sane people to join him in committing themselves to mental hospitals as patients and trying to get out on their own. What begins as an inspiring and daring story of experimentation darkens and twists as Cahalan closes in on a story shrouded in mystery—who were these seven ‘pseudopatients’ in Rosenhan’s groundbreaking study, and what really happened to them? The Great Pretender is not-to-be-missed narrative nonfiction.”
— Megan Bell, Underground Books, Carrollton, GA

“Cahalan dives deep into the personal papers of the professor who, years ago, designed a study of mental institutions that had participants go undercover as pseudo-patients. Having experienced a mental break herself due to a severe illness, the author tells a gripping tale and brings it even closer to her readers by folding in personal details. Her past experience as a journalist has her uncovering details never before known about this study, and her storytelling is unmatched.”
— Sissy Gardner, Parnassus Books, Nashville, TN

"One of America's most courageous young journalists" and the author of the #1 New York Times bestselling memoir Brain on Fire investigates the shocking mystery behind the dramatic experiment that revolutionized modern medicine in this international bestseller (NPR).

Doctors have struggled for centuries to define insanity--how do you diagnose it, how do you treat it, how do you even know what it is? In search of an answer, in the 1970s a Stanford psychologist named David Rosenhan and seven other people--sane, healthy, well-adjusted members of society--went undercover into asylums around America to test the legitimacy of psychiatry's labels. Forced to remain inside until they'd "proven" themselves sane, all eight emerged with alarming diagnoses and even more troubling stories of their treatment. Rosenhan's watershed study broke open the field of psychiatry, closing down institutions and changing mental health diagnosis forever.

But, as Cahalan's explosive new research shows in this real-life detective story, very little in this saga is exactly as it seems. What really happened behind those closed asylum doors?

Susannah Cahalan is the award-winning, New York Times bestselling author of Brain on Fire: My Month of Madness, a memoir about her struggle with a rare autoimmune disease of the brain. She writes for the New York Post. Her work has also been featured in the New York Times, Scientific American Magazine, Glamour, Psychology Today, and other publications. She lives in Brooklyn.

Named a Best Book of the Fall by Kirkus, Bookish, and LitHub

"This is a well-crafted, gripping narrative that succeeds on many levels. Cahalan, who gained the trust of Rosenhan's family, is meticulous and sensitive in her research; compelling and insightful in her writing."—The Financial Times

"A sharp investigation into how human self-interest, weaknesses, and egos can shape the way that science proceeds."—Undark

"A fascinating, potent, and crucial read."—Buzzfeed

"Cahalan's passionate and exhaustive reexamination of the famous research 'On Being Sane in Insane Places' by Stanford psychologist David Rosenhan is a riveting read...A terrific piece of detective work [with] fascinating insights into the mental health controversies that have swirled ever since the study's publication."—p.p1 {margin: 0.0px 0.0px 0.0px 0.0px; font: 11.0px Helvetica}span.s1 {font-kerning: none}Forbes

"The Great Pretender reads like a detective story, with Cahalan revealing tantalizing clues at opportune moments so we can experience the thrills of discovery alongside her...What she unearthed turned out to be far stranger, as documented in her absorbing new book, The Great Pretender. It's the kind of story that has levels to it, only instead of a townhouse it's more like an Escher print. On one level: A profile of Rosenhan and his study. On another: Cahalan's own experience of researching the book. And on a third: The fraught history of psychiatry and the pursuit of scientific knowledge."—New York Times

"Cahalan's research is dogged and her narrative riveting, leading us from red herring to clue and back with the dexterity of the best mystery novelists. Then she builds her case like a skilled prosecuting attorney."—p.p1 {margin: 0.0px 0.0px 0.0px 0.0px; font: 11.0px Helvetica}span.s1 {font-kerning: none}New York Journal of Books

"A thrilling mystery--and a powerful case for a deeper understanding of mental illness."—People Magazine

"An urgent, personal book...The Great Pretender reads like a suspense novel, with the reader unable to stop turning the pages. [This book] cements Cahalan's place in the ranks of the country's sharpest writers of nonfiction. The Great Pretender is an essential book, an a plea for the world to come to terms with the way we're treating some of our most vulnerable people."—NPR

"A gripping, insightful read, The Great Pretender...has the urgency of a call to action."—TIME Magazine

"Bold, brave, and original, THE GREAT PRETENDER grips you as tightly as the madness it investigates. Cahalan writes with enormous intelligence and style, and propels you through this dark and fascinating journey into psychiatry and the very nature of sanity."—Susan Orlean, New York Times bestselling author of The Orchid Thief and The Library Book

"People have asked me over the years: If they liked The Psychopath Test, what should they read next? I now have an answer. THE GREAT PRETENDER is such an achievement. It is a wonderful look at the anti-psychiatry movement and a great adventure--gripping, investigative--and is destined to become a popular and important book."—Jon Ronson, New York Times bestselling author of The Psychopath Test and So You've Been Publicly Shamed

"A masterpiece of historical reconstruction...an intellectual detective story [and] a towering critique of our systems of mental health-care. If I could've written this book, I would have."—Ron Powers, New York Times bestselling author of No One Cares About Crazy People

"The Great Pretender is a tight, propulsive, true-life detective story which somehow also doubles as a sweeping history of our broken mental health-care system. Cahalan herself has experienced this system as both a patient and a reporter, and her background informs every fascinating page of this dogged investigative odyssey. It is an amazing achievement, and there is no question it will go down as the definitive account of one of the most influential psychology experiments of all time."—p.p1 {margin: 0.0px 0.0px 0.0px 0.0px; font: 13.0px 'Times New Roman'}span.s1 {font-kerning: none}Luke Dittrich, New York Times bestselling author of Patient H.M.

"Breathtaking! Cahalan's brilliant, timely, and important book reshaped my understanding of mental health, psychiatric hospitals, and the history of scientific research. A must-read for anyone who's ever been to therapy, taken a brain-altering drug, or wondered why mental patients were released in droves in the 1980s. And a thrilling, eye-opening read even for those who thought they weren't affected by the psychiatric world."—p.p1 {margin: 0.0px 0.0px 0.0px 0.0px; font: 12.0px 'Times New Roman'}Ada Calhoun, author of St. Marks Is Dead and Wedding Toasts I'll Never Give

"Gripping [and] vivid...A well-told story fraught with both mystery and real-life aftershocks that set the psychiatric community on its ear...Cahalan follows all the leads like a bloodhound. Her pursuit reads like a well-tempered mystery being picked apart, with tantalizing questions for which many of the answers are just out of reach."—Kirkus, starred review

"Fascinating...Cahalan sets a new standard for investigative journalism...Her impeccable inquiry into the shadowy reality of Rosenhan's study makes an urgent case that the psychological and psychiatric fields must recover the public trust that 'Rosenhan helped shatter.'"—Publishers Weekly

"Brain on Fire was one of the most gripping, fascinating memoirs to come out in the last decade. Susannah Cahalan is back with what should be one of the most talked about books of 2019."—Inside Hook, 5 New Books You Should Be Reading This November

"Cahalan researched The Great Pretender over the course of five years, but the pages practically turn themselves. It's absorbing, sometimes sobering, sometimes seriously funny. Cahalan's narration makes the reading great fun, with an urgency occasionally akin to a thriller."—Shelf Awareness

"Susannah Cahalan has written a wonderful book that reflects years of persistent and remarkable historical detective work. The Great Pretender is an extraordinary look at the life of a Stanford professor and a famous paper he published in 1973, one that dramatically transformed American psychiatry in ways that still echo today. The book is fast-paced and artfully constructed--an incredible story that constitutes a tribute to Cahalan's powers as both a writer and a sleuth."—p.p1 {margin: 0.0px 0.0px 0.0px 0.0px; font: 12.0px 'Times New Roman'}Andrew Scull, author of Madness in Civilization: A Cultural History of Insanity

"A study that facilitated one of the most destructive changes in 20th-century domestic policy appears to be withering under scrutiny."—National Review

"A journalistic adventure story. . . Illuminates a game-changing moment in the history of psychiatry in this country."—NPR

"Cahalan is a gifted and dogged investigative reporter, and her work on this study is vital. The questions and concerns she raises about Rosenhan's research are long overdue."—Paste