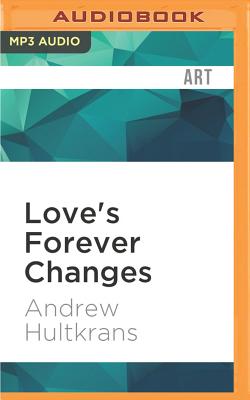 By Andrew Hultkrans, Jeremy Beck (Read by)
$9.99
Email or call for price

Forever Changes may be 36 years old at the time of this writing, but its hermetic fusion of the personal and the political feels more relevant than ever. It speaks to the present in ways that, say, a Jefferson Airplane record never could, whatever the parallels between the late '60s and our contemporary morass.

Conceived as the last testament of a charismatic recluse who believe he was about to die, Forever Changes is one of the defining albums of an era. Here, Andrew Hultkrans explores the myriad depths of this bizarre and brilliant record. Charting bohemian Los Angeles' descent into chaos at the end of the 60's, he teases out the literary and mystical influences behind Arthur Lee's lyrics, and argues that Lee was both inspired and burdened by a powerful prophetic urge.

Andrew Hultkrans is a writer who lives in Brooklyn. He is the former editor-in-chief of Bookforum magazine.33 1/3 is a new series of short books about critically acclaimed and much-loved albums of the last 40 years. Focusing on one album rather than an artist's entire output, the books dispense with the standard biographical background that fans know already, and cut to the heart of the music on each album. The authors provide fresh, original perspectives - often through their access to and relationships with the key figures involved in the recording of these albums. By turns obsessive, passionate, creative, and informed, the books in this series demonstrate many different ways of writing about music. (A task which can be, as Elvis Costello famously observed, as tricky as dancing about architecture.) What binds this series together, and what brings it to life, is that all of the authors - musicians, scholars, and writers - are deeply in love with the album they have chosen.