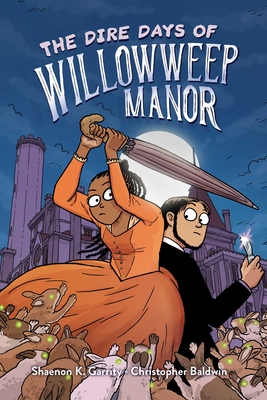 Nimona meets Paper Girls with a literary twist in this wickedly funny graphic novel about a teenager who is swept up in a strange new universe and must save it from an all-consuming evil in order to return home.

One dark and stormy night, Haley sees a stranger drowning in the river. Since her greatest passion is Gothic romance novels, she knows her moment has come. But when Haley leaps into the water to rescue the stranger, she awakens in Willowweep. It certainly looks like the setting of one of her favorite books: A stately manor. A sinister housekeeper. Three brooding brothers. There’s even a ghost.

Except Willowweep is not what it seems. Its romantic exterior hides the workings of a pocket universe—the only protection our world has against a great force of penultimate evil, and its defenses are crumbling. Could cruel fate make Haley the heroine that Willowweep needs?

Shaenon K. Garrity is an award-winning cartoonist and writer best known for the webcomics Narbonic and Skin Horse. Her short stories have appeared in many science fiction magazines and anthologies, and she is the author of Dire Days of Willowweep Manor. She lives in Berkeley, California. Visit her at Shaenon.com.

Christopher Baldwin was born in Greenfield, Massachusetts. He was a regular contributor to MAD Magazine for over a decade, and has drawn acclaimed webcomics including Bruno, Little Dee, and Spacetrawler. He has work exhibited or archived in the Roswell Museum and Art Center, the National Academy of Science, the Nevada Museum of Art, and the Cartoon Art Museum. He splits his time between Olympia, Washington, and Santa Fe, New Mexico. Visit him at BaldwinPage.com.

"This well-paced and humorous graphic novel will appeal to readers looking for a triumphant story about being in charge of your own narrative....A delightfully spirited adventure."
— Kirkus Reviews

"Baldwin’s expressive full-color art...and Garrity’s text both delight in their humor, conveying accentuated reactions, ranging from shocked to stoic, that lean into gleeful absurdity. A romp made especially enjoyable by Haley’s indulgent delight in Willowweep’s ability to make her literary dreams a reality."
— Publishers Weekly

"A delightful story for any age."
— Nerdist

*"Hilarious and exciting...The Dire Days of Willowweep Manor celebrates and satirizes a beloved genre while encouraging readers to defy the rules and become the heroes of their own stories."