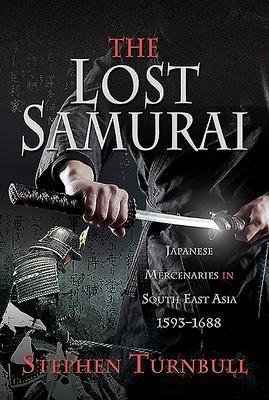 By Stephen Turnbull
for information about purchasing this book, please contact orders@bookpassage.com

The first ever account of Japanese overseas mercenaries including material never before translated into English, written by a renowned and highly respected expert on the subject.

The Lost Samurai reveals the greatest untold story of Japan's legendary warrior class, which is that for almost a hundred years Japanese samurai were employed as mercenaries in the service of the kings of Siam, Cambodia, Burma, Spain and Portugal, as well as by the directors of the Dutch East India Company.

The Japanese samurai were used in dramatic assault parties, as royal bodyguards, as staunch garrisons and as willing executioners. As a result, a stereotypical image of the fierce Japanese warrior developed that had a profound influence on the way they were regarded by their employers.

While the Southeast Asian kings tended to employ samurai on a long-term basis as palace guards, their European employers usually hired them on a temporary basis for specific campaigns. Also, whereas the Southeast Asian monarchs tended to trust their well-established units of Japanese mercenaries, the Europeans, whilst admiring them, also feared them. In every European example a progressive shift in attitude may be discerned from initial enthusiasm to great suspicion that the Japanese might one day turn against them, as illustrated by the long-standing Spanish fear of an invasion of the Philippines by Japan accompanied by a local uprising.

It also suggested that if, during the 1630s, Japan had chosen engagement with Southeast Asia rather than isolation from it, the established presence of Japanese communities overseas may have had a profound influence on the subsequent development of international relations within the area, perhaps even seeing the early creation of an overseas Japanese empire that would have provided a rival to Great Britain. Instead Japan closed its doors, leaving these fierce mercenaries stranded in distant countries never to return: lost samurai indeed.