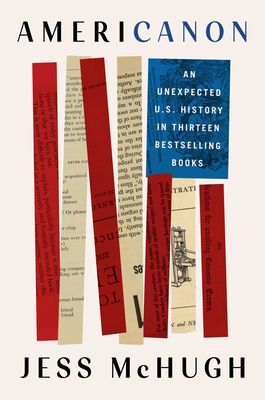 “An elegant, meticulously researched, and eminently readable history of the books that define us as Americans. For history buffs and book-lovers alike, McHugh offers us a precious gift.”—Jake Halpern, Pulitzer Prize winner and New York Times bestselling author

“With her usual eye for detail and knack for smart storytelling, Jess McHugh takes a savvy and sensitive look at the 'secret origins' of the books that made and defined us. . . . You won't want to miss a one moment of it.”—Brian Jay Jones, author of Becoming Dr. Seuss and the New York Times bestselling Jim Henson

The true, fascinating, and remarkable history of thirteen books that defined a nation

Surprising and delightfully engrossing, Americanon explores the true history of thirteen of the nation’s most popular books. Overlooked for centuries, our simple dictionaries, spellers, almanacs, and how-to manuals are the unexamined touchstones for American cultures and customs. These books sold tens of millions of copies and set out specific archetypes for the ideal American, from the self-made entrepreneur to the humble farmer.

Benjamin Franklin’s Autobiography, How to Win Friends and Influence People, Webster's Dictionary, Emily Post’s Etiquette: Americanon looks at how these ubiquitous books have updated and reemphasized potent American ideals—about meritocracy, patriotism, or individualism—at crucial moments in history. Old favorites like the Old Farmer’s Almanac and Betty Crocker’s Picture Cook Book are seen in this new way—not just as popular books but as foundational texts that shaped our understanding of the American story.

Taken together, these books help us understand how their authors, most of them part of a powerful minority, attempted to construct meaning for the majority. Their beliefs and quirks—as well as personal interests, prejudices, and often strange personalities—informed the values and habits of millions of Americans, woven into our cultural DNA over generations of reading and dog-earing. Yet their influence remains uninvestigated--until now.

What better way to understand a people than to look at the books they consumed most, the ones they returned to repeatedly, with questions about everything from spelling to social mobility to sex. This fresh and engaging book is American history as you’ve never encountered it before.

Jess McHugh is a writer and researcher whose work has appeared across a variety of national and international publications, including The New York Times, The Wall Street Journal, The Washington Post, The Nation, TIME, The Paris Review, The Guardian, The New Republic, New York magazine's The Cut, Fortune, Village Voice, The Believer, and Lapham's Quarterly, among others. She has reported stories from four continents on a range of cultural and historical topics, from present-day Liverpool punks to the history of 1960s activists in Greenwich Village.

"In an increasingly divided nation, it seems reasonable to ask: What is the glue that holds us together? It may be found here, in these bound pages. Jess McHugh has written an elegant, meticulously researched, and eminently readable history of the books that define us as Americans. For history buffs and book-lovers alike, McHugh offers us a precious gift, a reminder that our many narratives are intertwined and that--despite it all--they still bind us together."—Jake Halpern, Pulitzer Prize winner and New York Times bestselling author

“With her usual eye for detail and knack for smart storytelling, Jess McHugh takes a savvy and sensitive look at the 'secret origins' of the books that made and defined us. As McHugh shows, much of our American canon has to do largely with axe-grinding, reputation, redemption, and, often, who is permitted to tell the story--and you won't want to miss one moment of it.”—Brian Jay Jones, author of Becoming Dr. Seuss and the New York Times bestselling Jim Henson

“We are what we eat, but we are even more what we read. Jess McHugh paints a rich and colorful portrait of America through the popular stories and reference books woven over decades into our cultural DNA. For book-lovers and historians alike, Americanon is a fascinating behind-the-scenes look at how famous books are made, and the lives they live long after they're printed.”—Daniel Stone, author of The Food Explorer and writer for National Geographic

"What Jess McHugh has done with Americanon is draw a distinct, and necessary, line between our culture and our realities. The myths of what America is and what it means to be an American are strange, pernicious, and often inscrutable, but McHugh has managed a truly remarkable thing: finding actual and honest truth in the midst of it all."—Jared Yates Sexton, author of American Rule

“Carrying our E Pluribus Unum motto, the American eagle lands in unchartered territory with McHugh’s exploration of long-standing US pillars of self-reliance and can-do attitudes on behalf of all. She questions long-held narratives that appear from one voice and became authoritative how-to-live books. Hmm, were these voices and books contrived? In an age of diversity, this is an imperative read, particularly if you are concerned about social and political inclusion vs. exclusion policies. PS Betty Crocker needs a new recipe!”—Faith, RJ Julia at Wesleyan

“The concept behind Americanon is nothing short of bril­liant, and journalist Jess McHugh delivers on her inspired premise with insight and aplomb. . . . Some of the most astute observations in this penetrating history are about how these books’ creators did not always live by the same rules they imposed upon their rank-and-file readers. McHugh’s book is essential reading—illuminating, engaging, and absorbing. You’ll never look at the dictionary or cookbook on your shelf in quite the same way.”—BookPage (starred review)

“This more democratic canon is less about literary acumen and more about reading as mass self-revealment: Show McHugh the books Americans have flocked to over the course of history, she suggests, and she’ll show you what it means to be American. . . . McHugh’s chapters, winningly, are not close readings of each book but mini-histories of the texts’ creation and reception, the authors’ biographies, the public’s moods, the contexts of various eras. . . . McHugh has a knack for squeezing a lot of research into smallish spaces, and she sweetens the pot with throwaway but vivid details. (There are passing, tantalizing references to things like a 'tuberculosis-fueled vampire panic' and a religious book against dancing called From the Ball-Room to Hell.) . . . Some of the conclusions about the composite American character--especially in its early years--won’t shock too many citizens. Americans are striving, competitive, materialistic, insecure, confident, proudly self-reliant, optimistic, performatively virtuous. . . .  But the book resoundingly and memorably establishes these qualities through reading habits, and it highlights two qualities that perhaps haven’t been as well covered: We are prescriptive and hypocritical. Without overdoing it, McHugh clearly delineates how good Americans are--or at least American authors are--at giving advice they don’t follow.”—The New York Times

“Journalist McHugh examines a long bookshelf of didactic books by which Americans have self-educated. . . . A worthy, capably told look at a small canon of works demonstrating how to do well by doing good.”—Kirkus Reviews

“In a work spanning literary criticism and history, journalist McHugh explores a series of popular nonfiction books that fostered stereotypical American values, such as entrepreneurship, individualism, or fealty to family and community, and also conveyed practical knowledge. . . . McHugh’s work is distinctive and engaging as it describes American social history through the lens of mainstream nonfiction advice books, and explores how they define or redefine us.”—Library Journal

“With a snappy title and an earnest heart, Americanon, by journalist Jess McHugh, looks at thirteen 'American bibles.' . . . Eschewing fiction, whose Hucks and Uncle Toms and March sisters might face conflicts all too obviously plucked from the tapestry of American history, the canny and erudite McHugh selects plotless but far better-selling instructional volumes—Webster’s Dictionary, for goodness' sake! McGuffey Readers!—and shows how these books reveal the inner objectives of striving Americans while at the same time helping their achievement. . . . McHugh adroitly reveals how the DNA of each of these books can still be detected in an America that has in many ways evolved.”—Air Mail

“[McHugh’s] not interested in nostalgia here but a book-centric biopsy of the American soul. Sometimes that soul is bright and optimistic, and sometimes it’s dark and depraved. Often, and in each of her selections, it’s both at the same time. Of the thirteen books in McHugh’s analysis, not a single one is unequivocally praised or condemned. She not only investigates the history of each book but its messages and legacy as well. . . . This is where Americanon excels: in celebrating the parts of each work that are worthy of celebration while not dismissing the problematic aspects of each work and its promulgated ideas . . . If you want a surprising book that isn’t afraid to sift through the good and the bad to handle the truth effectively, read Americanon.”—Parks & Recommendations

“75 Nonfiction Books You Should Read This Summer . . . We like to think that culture—be it national or regional—is a reflection of the highest echelons of artistic creation, that we are as worthy of our mythologies as they are of us. This is not the case. As Jess McHugh discovers in this deep dive into thirteen of America’s most owned books—from farmer’s almanacs to dictionaries to cookbooks to etiquette guides—a nation’s story is shaped and told from much humbler texts.”—LitHub

"One of the 10 best books of June . . . This delightful book argues that enduring bestsellers, including The Old Farmer’s Almanac and How to Win Friends and Influence People, have contributed to a unified national identity as much as revered founding documents like the Constitution.”—Christian Science Monitor

“Given the dominance of American power and culture over the last century, it may be difficult to grasp the idea that there was no such thing as an American when the Revolutionary War ended. The nation had been formed; now its people needed to be invented. In Americanon, Jess McHugh tells the story of this invention and the ongoing reinforcement and reinvention the American character has undergone since. . . . Among McHugh’s accomplishments is the deft way she establishes the evolution of ideas across the books she explores. . . . Jess McHugh’s achievement in Americanon is that she makes clear some of the problems with these aspirations that are baked into their design and not as a result of our frequently having fallen short of them.”—Washington Independent Review of Books