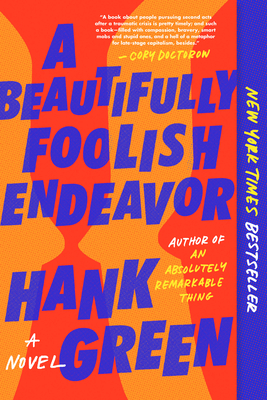 This is book number 2 in the The Carls series.

Who has the right to change the world forever?
How will we live online?
How do we find comfort in an increasingly isolated world?

The Carls disappeared the same way they appeared, in an instant. While the robots were on Earth, they caused confusion and destruction with only their presence. Part of their maelstrom was the sudden viral fame and untimely death of April May: a young woman who stumbled into Carl’s path, giving them their name, becoming their advocate, and putting herself in the middle of an avalanche of conspiracy theories.

Months later, April’s friends are trying to find their footing in a post-Carl world. Andy has picked up April’s mantle of fame, speaking at conferences and online; Maya, ravaged by grief, begins to follow a string of mysteries that she is convinced will lead her to April; and Miranda is contemplating defying her friends’ advice and pursuing a new scientific operation…one that might have repercussions beyond anyone’s comprehension. Just as it is starting to seem like the gang may never learn the real story behind the events that changed their lives forever, a series of clues arrive—mysterious books that seem to predict the future and control the actions of their readers—all of which seems to suggest that April could be very much alive.

In the midst of the search for the truth and the search for April is a growing force, something that wants to capture our consciousness and even control our reality. A Beautifully Foolish Endeavor is the bold and brilliant follow-up to An Absolutely Remarkable Thing. It is a fast-paced adventure that is also a biting social commentary, asking hard, urgent questions about the way we live, our freedoms, our future, and how we handle the unknown.

Hank Green is the #1 New York Times bestselling author of An Absolutely Remarkable Thing. He's also the CEO of Complexly, a production company that creates educational content, including Crash Course and SciShow, prompting The Washington Post to name him "one of America's most popular science teachers." Complexly's videos have been viewed more than two billion times on YouTube. Hank and his brother, John, are also raising money to dramatically and systematically improve maternal health care in Sierra Leone, where, if trends continue, one in seventeen women will die in childbirth. You can join them at PIH.org/hankandjohn.

Praise for A Beautifully Foolish Endeavor

“Hank Green’s punchy follow-up to his debut novel An Absolutely Remarkable Thing centers on a low-odds attempt at saving humanity from extraterrestrial sabotage. Infused with social media–savvy prose and all the latest tech fads—from cryptocurrency to brain-computer interfaces—the story unfolds through retelling from the alternating points of view of an alien emissary’s closest friends. The book is as pleasant an escape as a breezy spring day in a virtual reality simulation.”
—Fortune, “The Best Books of 2020, according to Fortune Staff”

“While there are many parallels to our current climate, A Beautifully Foolish Endeavor is a hopeful read that provides a "Black Mirror" like warning of new technology without the heavy feeling of dread. Green gives nuance to the privileges of escapism with humor and grace through main characters taking a chance on hope, even if it is beautifully foolish.”
—USA Today

“A raucous, boldly inventive tale of alien technology, social media and influencers, the limits of the human mind, and the lengths humans will go to get what they want. Even after a satisfying ending, readers will have much to think about.”
—Booklist (starred review)

“A book about people pursuing second acts after a traumatic crisis is pretty timely - and such a book, filled with compassion, bravery, smart mobs and stupid ones, and a hell of a metaphor for late-stage capitalism, besides.” ⁠
—Cory Doctorow

“A Beautifully Foolish Endeavor builds in every way on the thrills of the first book, featuring twists that are even twistier, mysteries that are even more mysterious, and, most impressive of all, solutions to those mysteries that are as interesting as their set-ups. This is a book that thinks deeply and wisely about fame, wealth, the internet, and the future of humanity, but also, and I’m not sure how Hank pulled this off, it’s fun as hell.”
—Joseph Fink, author of Welcome to Night Vale and Alice Isn't Dead

“A Beautifully Foolish Endeavor gracefully and fearlessly closes out the saga of April May, a book, if it is possible, even more engaging, thorny, personal, and thrilling than the first.”
—Catherynne Valente

“If you’re looking for a novel that will offer escapism alongside stinging social commentary and just the right amount of cautious optimism for humanity’s future, this might be the perfect read.”
—BookRiot

“Hank Green’s first novel, An Absolutely Remarkable Thing, had us furiously flipping pages to solve the mystery of the Carls. The much-anticipated sequel is finally here, and it’s just as adventurous and addicting. You’ll hang on every last word as you wonder what really happened to April May.”
—HelloGiggles

"In the follow-up to his debut novel, An Absolutely Remarkable Thing, Hank Green takes his cast of characters on an even bigger adventure and satisfyingly resolves deep mysteries set up in the first book... The story is a wake-up call to be aware of how social media content is created and how it might be influencing us."
—The Missoulian

“Throughout this adventurous, witty, and compelling novel, Green delivers sharp social commentary on the power of social media and both the benefits and horrendous consequences that follow when we give too much of ourselves to technology. An essential choice for all sf collections.”
—Library Journal (starred review)