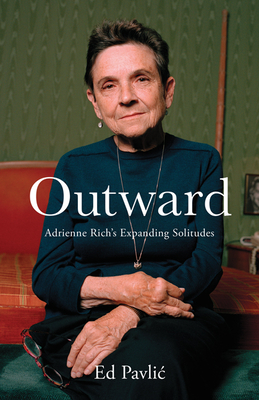 Adrienne Rich is best known as a feminist poet and activist. This iconic status owes especially to her work during the 1970s, while the distinctive political and social visions she achieved during the second half of her career remain inadequately understood. In Outward, poet, scholar, and novelist Ed Pavlic considers Rich’s entire oeuvre to argue that her most profound contribution in poems is her emphasis on not only what goes on “within us” but also what goes on “between us.” Guided by this insight, Pavlic shows how Rich’s most radical work depicts our lives—from the public to the intimate—in shared space rather than in owned privacy.

Informed by Pavlic’s friendship and correspondence with Rich, Outward explores how her poems position visionary possibilities to contend with cruelty and violence in our world. Employing an innovative framework, Pavlic examines five kinds of solitude reflected in Rich’s poems: relational solitude, social solitude, fugitive solitude, dissident solitude, and radical solitude. He traces the importance of relationships to her early writing before turning to Rich’s explicitly antiracist and anticapitalist work in the 1980s, which culminates with her most extensive sequence, “An Atlas of the Difficult World.” Pavlic concludes by examining the poet’s twenty-first century work and its depiction of relationships that defy historical divisions based on region, race, class, gender, and sexuality.

Ed Pavlic is distinguished research professor of English and African American studies at the University of Georgia. He is the author of twelve books, including, most recently, the poetry collection Let It Be Broke, the novel Another Kind of Madness, and the critical study Who Can Afford to Improvise? James Baldwin and Black Music, the Lyric and the Listeners. He also wrote Crossroads Modernism: Descent and Emergence in African-American Literary Culture (Minnesota, 2002).

"In Outward, Ed Pavlić uncovers new layers in Adrienne Rich’s poems as he traverses the long arc of her career. His work contemplates Rich’s engagement with the individual and the collective through a lyrical give-and-take with Rich’s poems that offers fresh insights into her poetic development, substantively furthering our understanding of one America’s foremost poets."—Jeannette E. Riley, author of Understanding Adrienne Rich

"Ed Pavlić maps Adrienne Rich’s path as a citizen poet in his Outward, surveying the underpinning of this activist’s life and poetry. In this sense, Outward serves as an overlay that clarifies theories through details. Pavlić shows us the paths taken—until Rich arrives at a place called ‘radical solitude.’"—Yusef Komunyakaa, author of Everyday Mojo Songs of the Earth

"Outward offers a compelling new framework for approaching Adrienne Rich's six-decade-long poetic career. In its focus on Rich's unstinting lyrical and ethico-political development, Pavlić's book offers a much-needed corrective to the scarcity of critical attention to the last three decades of Rich's writing life. At once a moving tribute to a mentor-friend and a robust critical assessment of her poetry, Outward will expand the scholarly conversation and introduce new generations of readers to the fullness of Rich's poetic legacy and her ‘radical vitality’ as one of the nation's greatest poets."—Cynthia R. Wallace, author of Of Women Borne: A Literary Ethics of Suffering