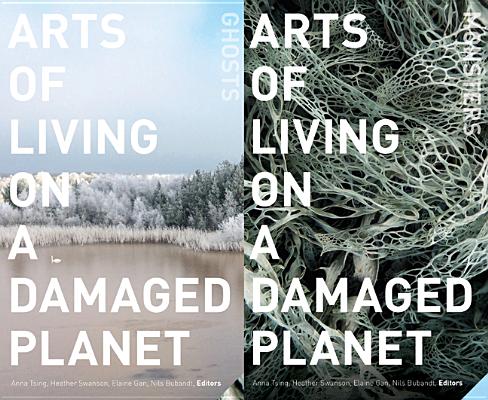 Living on a damaged planet challenges who we are and where we live. This timely anthology calls on twenty eminent humanists and scientists to revitalize curiosity, observation, and transdisciplinary conversation about life on earth.

Heather Swanson is assistant professor of anthropology at Aarhus University.

Elaine Gan is art director of AURA and postdoctoral fellow at Aarhus University.

Nils Bubandt is professor of anthropology at Aarhus University, where he codirects AURA.

"Arts of Living on a Damaged Planet exposes us to the active remnants of gigantic past human errors—the ghosts—that affect the daily lives of millions of people and their co-occurring other-than-human life forms. Challenging us to look at life in new and excitingly different ways, each part of this two-sided volume is informative, fascinating, and a source of stimulation to new thoughts and activisms. I have no doubt I will return to it many times."—Michael G. Hadfield, University of Hawai‘i at Manoa

"Facing the perfect storm strangely named the Anthropocene, this book calls its readers to acknowledge and give praise to the many entangled arts of living which made this planet liveable and which are now unravelling. Grandiose guilt will not do, we need to learn noticing what we were blind to, a humble but difficult art. The unique welding of scholarship and affect achieved by the texts here assembled tells us that learning this art also means allowing oneself to be touched and induced to think and imagine by what touches us."—Isabelle Stengers, author of Cosmopolitics I and Cosmopolitics II

"What an inventive, fascinating book about landscapes in the anthropocene! Between these book covers, rightside-up, upside-down, a concatenation of social science and natural science, artwork and natural science, ghosts of departed species and traces of our own human shrines to memory... Not a horror-filled glimpse at destruction but also not a hymn to romantic wilderness. Here, guided by a remarkable and remarkably diverse set of guides, we enter into our planetary environments as they stand, sometimes battered, sometimes resilient, always riveting in their human—and non-human—richness. Arts of Living On a Damaged Planet is truly a book for our time."—Peter Galison, Harvard University

"Calling a book ‘mandatory reading’ usually feels hyperbolic, but it's justified in the case of Arts of Living on a Damaged Planet. A stunning collection of essays from scientists, writers and artists on humankind's impact on the planet, and how we all can survive it."—Shelf Awareness

"This vibrant, moving, and philosophical two-sided essay collection reminds us of all the ways that human beings and the natural world are interconnected. Deborah Bird Rose’s piece on the “shimmer of life” alone makes the book worth reading."—Chicago Review of Books

"There’s a poetry in facts. And as this book reveals, there is an increasing amount of courage and acceptance to be found in understanding even the most destructive changes in plant and wildlife that the overheated Anthropocene will bring us."—Santa Fe New Mexican

"Well worth reading: a frank, luminous set of dispatches from future worlds and fractured pasts."—Full Stop

"Arts of Living on a Damaged Planet is a strikingly aesthetic object, carefully curated at the level of form as well as content. It makes a convincing case for the relevance of ‘hard science’ to art and politics."—Glasgow Review of Books

"The Anthropocene is characterised by extreme and irreversible changes to the environment, resulting in an exponential scarcity of living beings and threats to most life systems on earth. In response to this precarity, the editors and contributors to Arts suggest that we must collectively observe and study the world around us to attune our co-existence more authentically to these ecologies, through increased knowledge about both the impacts of past actions and our embeddedness in multispecies webs."—Environmental Values

"By focusing on entanglement and haunting in this double-sided book, the contributors in Arts of Living on a Damaged Planet demand a reconceptualisation of what it means to be active participants in the Anthropocene. They also want us to recognise that our standing is not at all separate from nature, time, or matter."—Gothic Nature Journal

"The editors of Arts of Living on a Damaged Planet set out to illustrate through storytelling the ambivalent entanglements of ghosts and monsters in the Anthropocene as a practical means toward broadening our knowledge-creation of the challenges of a world in the making. If the scientific community takes to heart their offering (and the offerings of those who came before them), the scientific paradigm-shift (that started with feminist science studies, the civil rights movement, and environmentalism) from objectivity to subjectivity might just take hold as a dominant epistemology."—Hypatia Reviews

"Arts of Living is a provocative dispatch from the edges of humanity’s new condition."—Sedimenta