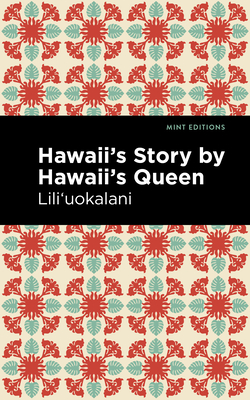 By Lili'uokalani, Mint Editions (Contribution by)
$13.99

Hawaii's Story by Hawaii's Queen (1898) is an autobiography by Lili'uokalani. Published in 1898, the book was written in the aftermath of Lili'uokalani's attempt to appeal on behalf of her people to President Grover Cleveland, a personal friend. Although it inspired Cleveland to demand her reinstatement, the United States Congress published the Morgan Report in 1894, which denied U.S. involvement in the overthrow of the Kingdom of Hawaii. Hawaii's Story by Hawaii's Queen appeared four years later as a final effort by Lili'uokalani to advocate on behalf of Hawaiian sovereignty, but it unfortunately came too late. That same year, President McKinley and the United States Congress approved the annexation of Hawaii.

In Hawaii's Story by Hawaii's Queen, Lili'uokalani reflects on her experiences as a young girl growing up on Oahu, where she was raised as a member of the extended royal family of King Kamehameha III. Born in Honolulu, she was educated and groomed to one day ascend to the throne. Lili'uokalani developed an artistic sensibility early on, and was fond of both writing and music, crafting the lyrics to the popular song "Aloha 'Oe" (1878). Although her book was unsuccessful as an attempt to advocate for Hawaiian sovereignty and the restoration of the monarchy, it has since been recognized as a moving personal portrait of a girl who grew up to become Hawaii's first and only queen, a beloved monarch who fought for the rights of her people.

With a beautifully designed cover and professionally typeset manuscript, this edition of Lili'uokalani's Hawaii's Story by Hawaii's Queen is a classic of Hawaiian literature reimagined for modern readers.