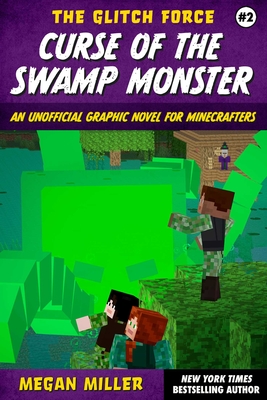 This is book number 2 in the The Glitch Force series.

The second book in the all-new Glitch Force series for Minecrafters!

The Glitch Force: Three kids interested in Minecraft. There’s Duncan, a genius redstoner, Miranda, a sharpshooter with encyclopedic knowledge of Minecraft, and Zed, an expert builder with a prankster heart. Oh, and Duncan happens to a genius at repurposing his scientist mother's quantum electronic gizmos. When he happens to find a quantum glitch in the Minecraft programming code, it creates an opening for the three kids to visit Minecraft worlds FOR REAL. The problem is, the glitch technology isn't quite stable yet, and dangerous anomalies in their new world threaten their ability to return home. They will have to repair each world before they have any chance of returning to reality.

There’s rumor of a major anomaly in a swamp in Sector Z-D71508, and the Glitch Force must investigate. Everything looks normal, until nighttime, when a bubbling green ooze begins to seep from the swamp, infecting everything it touches. But Miranda, Zed, and Duncan’s efforts to contain it only make the problem worse—The green slime solidifies and mutates into an enormous hostile mob that engulfs everything in its path. But is this green swamp monster the real enemy? A frog tornado, a pack of hissing feral cats, and a hidden trove of deadly potions suggest that the anomaly is more complicated than they imagined.

Megan Miller was born in Talara, Peru, and from there grew up in Miami, Barcelona, and the suburbs of London, England. She's also lived in Houston, Austin, NYC, the Hudson Valley, Kentucky, and finally New Mexico. She plays Minecraft daily, and has also spent many hours in the past with arcade game Centipede, the first Castle Wolfenstein shooters, the first color Mac space shooter Crystal Quest, The Sims, Sim City (1-3), City Skylines, Civilization, and more. You can contact her through her website, meganfmiller.com - (see you there!)