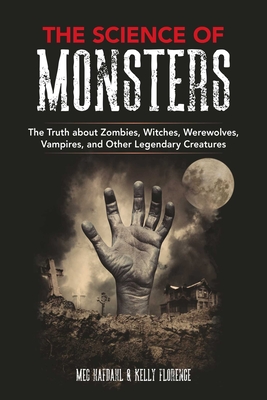 By Meg Hafdahl, Kelly Florence
$14.99
Email or call for price

A must-have for any fan of horror and fantasy movies—Night of the Living Dead, A Nightmare on Elm Street, The Shining (Stephen King), and so many more!

If you love film that scares, and want to believe that zombies, vampires, and other deadly and terrifying creatures could be real, let Meg Hafdahl and Kelly Florence, the women behind the Horror Rewind podcast called “the best horror film podcast out there” by Film Daddy, take you to the world where horror and science meet. Gothic media moguls Meg Hafdahl and Kelly Florence revisit the films from their childhood to discover the science behind the fear. Join Kelly and Meg as they unravel the medical mysteries and scientific marvels that inspired the creation of famous monsters like Nosferatu, Norman Bates, Dracula, Frankenstein, and many more.

An approachable and frightfully fun examination of what goes bump in the night, The Science of Monsters will thrill every horror fan.

Meg Hafdahl is an author and co-host of the Horror Rewind podcast. Her female-driven horror stories have been produced for audio by The Wicked Library and in anthologies such as Eve’s Requiem: Tales of Women, Mystery and Horror. Meg lives in Minnesota with her husband, two young sons, and a menagerie of pets.

Kelly Florence is a teacher, a mother, and a horror film lover. She is passionate about female representation in all media and particularly in the horror genre. Kelly produces and co-hosts Horror Rewind. She also owns Gothic Gifts, a shop for fans of horror.