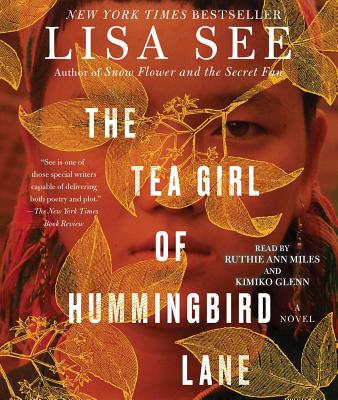 By Lisa See, Ruthie Ann Miles (Read by), Kimiko Glenn (Read by), Alex Allwine (With), Gabra Zackman (With), Jeremy Bobb (With), Joy Osmanski (With), Emily Walton (With), Erin Wilhelmi (With)
for information about purchasing this book, please contact orders@bookpassage.com

“This captivating story is set in a remote Yunnan village where, for many years, the Akha people have followed the rituals and cycles of harvesting tea leaves. Slowly, the changes going on in the rest of China begin to reach the area. Li-yan, one of the few educated girls in the village, acts as translator for a stranger seeking a rare tea from Yunnan. When Li-yan gives birth to a baby out of wedlock, she wraps her baby in a blanket along with a package of the rare tea and leaves her in a city where she will be taken to an orphanage. Over the years, mother and daughter dream of finding one another again. Brew yourself a cup of tea and settle down to read this tale of family and the search for answers in different places and cultures.”
— Elizabeth Merritt (M), Titcomb's Bookshop, East Sandwich, MA

From #1 New York Times bestselling author Lisa See, “one of those special writers capable of delivering both poetry and plot” (The New York Times Book Review), a moving novel about tradition, tea farming, and the bonds between mothers and daughters.

In their remote mountain village, Li-yan and her family align their lives around the seasons and the farming of tea. For the Akha people, ensconced in ritual and routine, life goes on as it has for generations—until a stranger appears at the village gate in a jeep, the first automobile any of the villagers has ever seen.

The stranger’s arrival marks the first entrance of the modern world in the lives of the Akha people. Slowly, Li-yan, one of the few educated girls on her mountain, begins to reject the customs that shaped her early life. When she has a baby out of wedlock—conceived with a man her parents consider a poor choice—she rejects the tradition that would compel her to give the child over to be killed, and instead leaves her, wrapped in a blanket with a tea cake tucked in its folds, near an orphanage in a nearby city.

As Li-yan comes into herself, leaving her insular village for an education, a business, and city life, her daughter, Haley, is raised in California by loving adoptive parents. Despite her privileged childhood, Haley wonders about her origins. Across the ocean Li-yan longs for her lost daughter. Over the course of years, each searches for meaning in the study of Pu’er, the tea that has shaped their family’s destiny for centuries.

A powerful story about circumstances, culture, and distance, The Tea Girl of Hummingbird Lane paints an unforgettable portrait of a little known region and its people and celebrates the bond of family.

Lisa See is the New York Times bestselling author of The Island of Sea Women, The Tea Girl of Hummingbird Lane, Snow Flower and the Secret Fan, Peony in Love, Shanghai Girls, China Dolls, and Dreams of Joy, which debuted at #1. She is also the author of On Gold Mountain, which tells the story of her Chinese American family’s settlement in Los Angeles. See was the recipient of the Golden Spike Award from the Chinese Historical Association of Southern California and the Historymaker’s Award from the Chinese American Museum. She was also named National Woman of the Year by the Organization of Chinese American Women.

Gabra Zackman knows romance. Her clever and “thrilling romantic caper” (Library Journal) Bod Squad series was inspired by the more than one hundred romance and women’s fiction titles she has narrated for audio. She divides her time between her native New York City and Denver, Colorado.