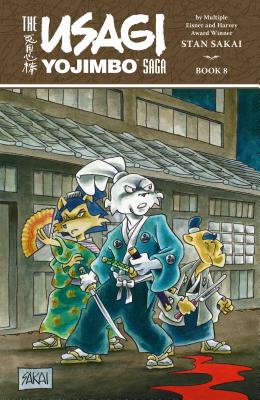 Stan Sakai's enduring samurai masterpiece continues with a volume full of incredible stories you won't want to miss! Join everyone's favorite rabbit ronin as he continues his gripping exploits on the warrior's path!

The eighth volume in Stan Sakai's prestige Saga collection includes three volumes-worth of storylines: "Two Hundred Jizo", in which Usagi and Inspector Ishida team up to solve a double murder, help an allied clan protect its honor, and discover the soy sauce business is as deadly as it is tasty; "Thieves and Spies", where Usagi joins forces with a thief and a samurai to thwart a black-market Ginseng trade, meets a fellow ronin with a few tricks up his sleeve, comes sword-to-sword with a brash European envoy, and escorts a bride-to-be to her fiancé only to uncover a matrimonial assassination plot; and "The Hell Screen", a thrilling tale that finds Usagi working alongside his natural enemy--a Kappa--to cast out a violent renegade, face-to-face with a deadly Komori ninja who owes Usagi a debt, and teams up once more with Ishida in the midst of an investigation of a ghastly painting known only as the Hell Screen!

Stan Sakai was born in Kyoto, Japan, grew up in Hawaii, and now lives in California with his children, Hannah and Matthew. He received a fine arts degree from the University of Hawaii and did further studies at the Art Center College of Design in Pasadena, California. His creation, Usagi Yojimbo, is the story of a samurai rabbit living in a feudal Japan populated by anthropomorphic animals. It first appeared in Albedo Comics in 1984. Since then, Usagi has appeared on television as a guest of the Teenage Mutant Ninja Turtles; and as toys, on clothing, in comic books, and in a series of trade paperback collections. In 1991, Stan created Space Usagi, the adventures of a descendant of the original Usagi, dealing with the samurai in a futuristic setting. Stan is also an award-winning letterer for his work on Sergio Aragonés's Groo: The Wanderer, the Spider-Man Sunday newspaper strips, as well as for Usagi Yojimbo. He is the recipient of a Parents' Choice Award, an Inkpot Award, multiple Eisner Awards, two Spanish Haxturs, an American Library Association Award, and a National Cartoonists' Society Division Award. Usagi Yojimbo Book 12: Grasscutter was used as a textbook in Japanese history classes at the University of Portland.