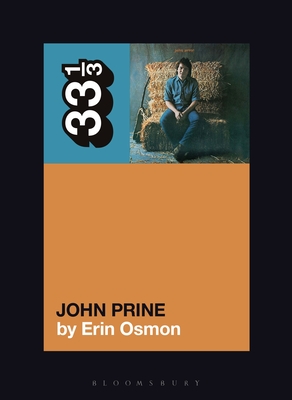 He is known as the Mark Twain of American songwriting, a man who transformed the everyday happenings of regular people into plainly profound statements on war, industrialization, religion, and the human condition. Marking the 50th anniversary of the album's release, John Prine chronicles the legendary singer-songwriter's Middle American provenance, and his remarkable ascent from singing mailman to celebrated son of Chicago."Illegal Smile," "Hello in There," "Sam Stone," "Paradise," "Your Flag Decal Won't Get You Into Heaven Anymore," "Far from Me," "Donald and Lydia," and "Angel from Montgomery" are considered standards in the American Songbook, covered by legions of Prine's peers and admirers. Through original interviews, exhaustive research, and incisive commentary, author Erin Osmon paints an in-depth portrait of the people, places, and experiences that inspired Prine's landmark debut.

After exploring his roots in rural Western Kentucky and suburban Maywood, Illinois, the book takes readers on an evocative journey through John Prine's Chicago. Its neighborhoods, characters, and clubs of the 1960s and 70s proved a formative and magical period in Prine's life, before he was a figurehead of the new Nashville scene. It's both a journalistic inquiry and a love letter: to Prine's self-titled debut and the Midwestern city that made him.

Erin Osmon is a Midwest native and a veteran of Chicago newsrooms whose work appears in Uncut, No Depression, Rolling Stone, Pitchfork, Billboard, The Guardian, and many other publications. She teaches music journalism, writing, reporting and digital at the University of Southern California's Annenberg School, USA. Her debut book, Jason Molina: Riding with the Ghost (2017), was named a Best Music Book of 2017 by Pitchfork