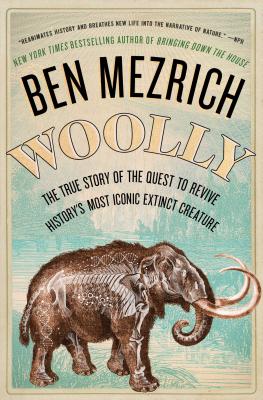 The bestselling author of The Accidental Billionaires and The 37th Parallel tells the fascinating Jurassic Park­-like story of the genetic restoration of an extinct species—the woolly mammoth. “Paced like a thriller…Woolly reanimates history and breathes new life into the narrative of nature” (NPR).

With his “unparalleled” (Booklist, starred review) writing, Ben Mezrich takes us on an exhilarating and true adventure story from the icy terrain of Siberia to the cutting-edge genetic labs of Harvard University. A group of scientists work to make fantasy reality by splicing DNA from frozen woolly mammoth into the DNA of a modern elephant. Will they be able to turn the hybrid cells into a functional embryo and potentially bring the extinct creatures to our modern world?

Along with this team of brilliant scientists, a millionaire plans to build the world’s first Pleistocene Park and populate a huge tract of the Siberian tundra with ancient herbivores as a hedge against an environmental ticking time bomb that is hidden deep within the permafrost. More than a story of genetics, this is a thriller illuminating the real-life race against global warming, of the incredible power of modern technology, of the brave fossil hunters who battle polar bears and extreme weather conditions, and the ethical quandary of cloning extinct animals. This “rollercoaster quest for the past and future” (Christian Science Monitor) asks us if we can right the wrongs of our ancestors who hunted the woolly mammoth to extinction and at what cost?

Ben Mezrich graduated magna cum laude from Harvard. He has sold over ten million copies of his twenty-four published books, including the New York Times Bestsellers The Accidental Billionaires, which was adapted into the Academy Award–winning film The Social Network, and Bringing Down the House, which was the basis for the hit movie 21. His current bestseller The Antisocial Network is being adapted into the feature film Dumb Money. Ben has written and produced for the hit TV show Billions on Showtime, and he travels the world speaking to audiences of all ages about writing books and the adventures he has experienced from each of his stories. He lives in Boston with his wife, two kids, and two pugs.

“Paced like a thriller…Woolly reanimates history and breathes new life into the narrative of nature.”
— NPR

“A page-turning tale. . . .[a] rollercoaster quest for the past and future. . . . Mezrich’s ability to weave the details of DNA science into an easily accessible narrative does much to broaden the lay reader’s understanding of the tremendous developments and awe-inspiring capabilities of some of today’s most groundbreaking science.”
— Christian Science Monitor