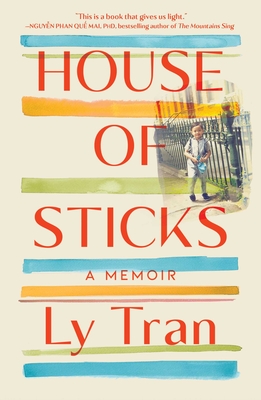 The gulf between the fantasy of the American dream and the immigrant experience is unsparingly detailed in this impressive memoir by Ly Tran. Her family left the banks of the Mekong river to find a better life in Ridgewood Queens, but the horrors of the past were more difficult to leave behind and the hurdles of a new beginning often proved overwhelming. Caught between two cultures, Ly grapples with her parents’ expectations for their daughter and her desire to see a future for herself. Too often we overlook the grit and heart required by those that seek refuge on our shores; House of Sticks reminds us why their stories should be heard.

“This timely book follows the life of a young woman whose family immigrates to New York from Vietnam. It is a heartbreaking look at the challenges to overcoming PTSD, poverty, and mental illness. Ultimately, Ly Tran’s story is one of hope, one that is much-needed today.”
— Alecia Diane Castro, Sweet Home Books, Wetumpka, AL

One of Vogue and NPR’s Best Books of the Year

This beautifully written “masterclass in memoir” (Elle) recounts a young girl’s journey from war-torn Vietnam to Queens, New York, “showcas[ing] the tremendous power we have to alter the fates of others, step into their lives and shift the odds in favor of greater opportunity” (Star Tribune, Minneapolis).

Ly Tran is just a toddler in 1993 when she and her family immigrate from a small town along the Mekong river in Vietnam to a two-bedroom railroad apartment in Queens. Ly’s father, a former lieutenant in the South Vietnamese army, spent nearly a decade as a POW, and their resettlement is made possible through a humanitarian program run by the US government. Soon after they arrive, Ly joins her parents and three older brothers sewing ties and cummerbunds piece-meal on their living room floor to make ends meet.

As they navigate this new landscape, Ly finds herself torn between two worlds. She knows she must honor her parents’ Buddhist faith and contribute to the family livelihood, working long hours at home and eventually as a manicurist alongside her mother at a nail salon in Brooklyn that her parents take over. But at school, Ly feels the mounting pressure to blend in.

A growing inability to see the blackboard presents new challenges, especially when her father forbids her from getting glasses, calling her diagnosis of poor vision a government conspiracy. His frightening temper and paranoia leave a mark on Ly’s sense of self. Who is she outside of everything her family expects of her?

An “unsentimental yet deeply moving examination of filial bond, displacement, war trauma, and poverty” (NPR), House of Sticks is a timely and powerful portrait of one girl’s coming-of-age and struggle to find her voice amid clashing cultural expectations.

Ly Tran graduated from Columbia University in 2014 with a degree in creative writing and linguistics. She has received fellowships from MacDowell, Art Omi, and Yaddo. House of Sticks is her first book.

"Tran fluctuates between tenderness and quiet rage ... [Tran] honor[s] these complexities, tell[s] us we were not meant to swallow our pain and survive in this world without support systems."
—New York Times Book Review

"[An] unsentimental yet deeply moving examination of filial bond, displacement, war trauma, and poverty. Ostensibly an immigrant success story, Tran's narrative power lies in its nuanced celebration of filial devotion that withstands the enormous cost of the American dream ... The dilapidated nail salon in a racially volatile Brooklyn neighborhood that Tran's parents came to own after the end of their sweatshop era — with its filing sticks as tools of the trade — witnessed their stark tribulations as well as the wondrous resilience of their immigrant selves. In the end, Tran's empathy and her parents' appreciation of her filial love cemented the emotional bricks that steady their seemingly tenuous hold on this unaccustomed earth."
—NPR

“Powerful … showcases the tremendous power we have to alter the fates of others, step into their lives and shift the odds in favor of greater opportunity”
—Minneapolis Star Tribune

“House of Sticks is a book that will assault and warm your heart at the same time—a classic immigrant tale, told from the perspective of a Vietnamese child who settled with her family in New York City in the early ‘90s with little to no knowledge about life in America… But it is also much more: a coming of age story, A New York hustle, a battle with a father who not only maintains an ironclad sense of filial duty, but also, fueled by his paranoia, exercises irrational control over things like vision correction. (In another elegant examination of absence, the book recounts what a fundamental challenge it is to move through the world without basic ability to see.)”
—Vogue, Best Books to Read 2021

“Graceful but unflinching, Ly Tran's House of Sticks follows the author's immigration from Vietnam to New York as a toddler, and the subsequent identity shaping and re-shaping she undergoes throughout her youth and early adult years. Resettled in Queens through a humanitarian program—her father is a former POW—Tran attempts to honor her family through faith and labor, only to find herself yearning for something that exists outside of their home. Intimate yet universal, this is a masterclass in memoir.”
—Elle, Best Books of Summer 2021

"A moving recount of how Tran and her family immigrated from a small town in Vietnam to a two-bedroom railroad apartment in Queens, and how she forged her path in a new culture."
—Marie Claire, 20 New Books by Asian Authors to Get Excited About

"Tran found herself pulled in myriad directions by her desires: to please her family, to fit in with her friends, to chart her own course, to belong. She tells her own coming-of-age story in House of Sticks."
—Bustle, 44 New Must-Read Books Out This June

“In this moving debut memoir, Ly Tran recounts emigrating from Vietnam to the United States with her family in the early 1990s. It’s in New York City that she comes into her own, at once attempting to fit into this new world as well as honor deep traditions, the need to contribute to the family and her father’s resistance to new ways.”
—Ms. Magazine

"While Ly Tran’s debut memoir House of Sticks is an affecting tale of the immigrant experience, it is also a beautiful coming-of-age story that traverses from Tran’s early childhood all the way up to her college years."
—Mochi Magazine

“A special memoir in which, though circumstances are difficult, love wins out…beautiful and inspirational.”
—Fredricksburg Free-Lance Star

"In this insightful and oftentimes heartbreaking new memoir, Tran details growing up as an immigrant in late '90s and early '00s America … Each chapter brings incredible insight into the immigrant experience, what it is like to learn an entirely new culture, and what it means to forge a path of one's own."
—Erie Reader

"In this coming-of-age memoir, author Ly Tran recounts how her family immigrated from Vietnam to Queens when she was a child, along with their troubles trying to make ends meet."
—NBCNews.com,10 Best Beach Reads for Summer

“[Tran’s] deeply compelling memoir tells the story of growing up torn between two worlds: that of her hardworking Buddhist parents with sky-high expectations and the one she wants to discover for herself in America.”
—HelloGiggles, 10 Best New Books to Add to Your June Reading List

“In her phenomenal debut, House of Sticks: A Memoir, Ly Tran mines both trauma and love from her coming of age as a young Vietnamese immigrant to the United States … Her vivid, unadorned narration yields a painful but powerful exploration of the struggle to find a sense of self within a family at the cross-section of cultures, and Tran's story is impossible to forget.”
—Shelf Awareness

"[An] emotional experience in the form of beautifully heartbreaking prose."
—Off the Shelf

"Tracing the paths of immigration and poverty, Tran’s moving and exceptionally readable memoir is at once heartbreaking, shocking, and hopeful ... Tran is exceptional at telling her story with honesty and without judgment. Readers who loved Tara Westover's Educated (2018) will find a similarly compelling memoir of resilience in a not-often-seen America."
—Booklist, starred review

“At the heart of Tran’s story as a Vietnamese refugee, a young woman, a daughter, a sister, and much more, lie the intimately drawn portraits of the people whom she loves despite their imperfections and the people who love her—despite hers. House of Sticks is a vibrant reminder of the ferocious courage it takes to love and to be loved, and how that courage is the first step toward finding your place in the world.”
—Phuc Tran, author of Sigh, Gone

"On the landscape of nail salons and her family’s sweat shop, Ly Tran paints the songs of her courage, dreams, and her fight for sanity and humanity. This is the story of a magnificent lotus who rises up from a pond of mud – the mud of poverty, racism, inherited trauma, depression – with the power and radiance of her storytelling. This is a book that demands us to look beyond just the name of each and every war refugee. This is a book that gives us light.”
— Nguyễn Phan Quế Mai, PhD, bestselling author of The Mountains Sing

"I guarantee that you will never see the nail salon technician in the same way after reading Ly Tran’s memoir. House of Sticks is a powerful report from the trenches of the immigrant experience and what it really means to become an American. It’s Tran’s story, but it’s also the story of this country—and in this day and age we would do well not to forget that."
—Saïd Sayrafiezadeh, author of When Skateboards Will be Free and Brief Encounters With the Enemy

"Like Tara Westover's memoir, Educated, this book is a record of resilience. A story about finding a place in America and about finding a voice, Ly Tran's House of Sticks is destined to join the canon of refugee literature."
—Amitava Kumar, author of Immigrant, Montana

"In this remarkable memoir, Ly Tran tracks trauma and resilience with deep generosity for all the people in her life. Her prose is spare and unflinching, but the story she tells is layered and rich. This is an America we all need to know."
—Cris Beam, author of To The End of June: The Intimate Life of American Foster Care

"With the trenchancy of a social novel, Ly Tran’s House of Sticks tracks the cost of arriving and surviving in America. Hours of labor. Rent, food, square footage. Growing up between worlds that increasingly diverge, she explores with striking honesty and tenderness the family ledger, where the burden of payment and repayment is constantly being calculated, and where love is recorded as both debt and wealth. A completely unprecedented book."
—Heidi Julavits, author of The Vanishers

“Ly Tran’s struggles to locate and nurture her essential self as a Vietnamese immigrant, a woman, an American, and a young writer offer an essential window into hitherto unseen lives. Spare, devastating, and redemptive, this book will open your eyes and heart.”
—Julie Metz, author of Perfection and Eva and Eve

“The soaring blue tarp of a vast tent in a Thai refugee camp is Ly Tran’s first memory. Age 3, she travels from a nhà lá in verdant Vietnam to an unheated railroad flat in snowy Queens with her parents and brothers. Ly’s inspiring memoir unforgettably expresses the internal cost of the immigrant success story, particularly for those ambitious, gifted daughters whose triumphs are so hard-won. House Of Sticks, a gem to “be the light” on every bookshelf, should be required reading for Americans anywhere.”
—Jayne Anne Phillips, author of Lark & Termite, Machine Dreams, and Black Tickets