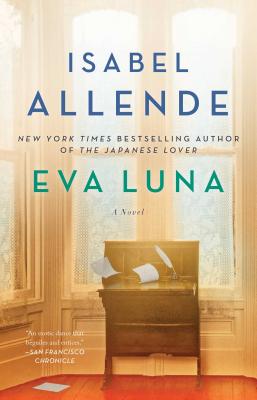 “A remarkable novel” (The Washington Post) from New York Times bestselling author Isabel Allende’s introducing her most enchanting creation, Eva Luna: a lover, a writer, a revolutionary, and above all a storyteller.

Eva Luna is the daughter of a professor’s assistant and a snake-bitten gardener—born poor, orphaned at an early age, and working as a servant. Eva is a naturally gifted and imaginative storyteller who meets people from all stations and walks of life. Though she has no wealth, she trades her stories like currency with people who are kind to her. In this novel, she shares the story of her own life and introduces readers to a diverse and eccentric cast of characters including the Lebanese émigré who befriends her and takes her in; her unfortunate godmother, whose brain is addled by rum and who believes in all the Catholic saints and a few of her own invention; a street urchin who grows into a petty criminal and, later, a leader in the guerrilla struggle; a celebrated transsexual entertainer who instructs her in the ways of the adult world; and a young refugee whose flight from postwar Europe will prove crucial to Eva's fate.

As Eva tells her story, Isabel Allende conjures up a whole complex South American nation—the rich, the poor, the simple, and the sophisticated—in a novel replete with character and incident, with drama and comedy and history, with battles and passions, rebellions and reunions, a novel that celebrates the power of imagination to create a better world.

Born in Peru and raised in Chile, Isabel Allende is the author of a number of bestselling and critically acclaimed books, including The House of the Spirits, Of Love and Shadows, Eva Luna, The Stories of Eva Luna, Paula, and The Japanese Lover. Her books have been translated into more than thirty-five languages and have sold more than 65 million copies worldwide. She is the receipient of the Medal for Distinguished Contribution to American Letters, and she divides her time between California and Chile.

“A remarkable novel, one in which a cascade of stories tumbles out before the reader, stories vivid and passionate and human…Reading this novel is like asking your favorite storyteller to tell you a story and getting a hundred stories!”
— Alan Ryan

“Here is a finely-woven tale that combines, in a distinctly Latin American context, the fairy-tale quality of the Arabian Nights with the picaresque adventures of a Tom Jones. "
— Financial Times

“Eva Luna is a cornucopia of stories, a tightly concocted, seemingly effortless spilling forth of incident and accident, autobiography and fantasy. This novel is a tapestry, a rich web of whimsy.”
— The Commercial Appeal (Memphis)

“First, novels like Eva Luna display a straightforward, if voracious, appetite for story-telling of the oldest sort. Eva herself is that rare thing: an original and memorable character with dimensions greater than those managed by most ‘real’ people. The same distinction applies to Allende.”
— The Herald (Glasgow)

“Reading Eva Luna is as enjoyable as it is stimulating. Allende proves once again her ability to combine the political and the personal with tragedy, creativity and wit.”
— Santa Barbara News-Press

“Eva Luna is a prolonged and tantalizing seduction of the imagination. The novel’s mix of myth and politics conveys the stuff of life.”
— Ham & High (UK)

“In Eva Luna, the celebration of a storyteller echoes the story of Allende herself as she has mesmerized the world with books translated into almost every language in the western cultures.”
— Ex Libris