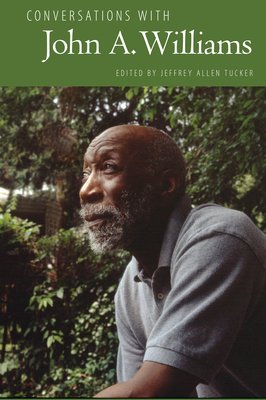 One of the most prolific African American authors of his time, John A. Williams (1925-2015) made his mark as a journalist, educator, and writer. Having worked for Newsweek, Ebony, and Jet magazines, Williams went on to write twelve novels and numerous works of nonfiction. A vital link between the Black Arts movement and the previous era, Williams crafted works of fiction that relied on historical research as much as his own finely honed skills. From The Man Who Cried I Am, a roman a clef about expatriate African American writers in Europe, to Clifford's Blues, a Holocaust novel told in the form of the diary entries of a gay, black, jazz pianist in Dachau, these representations of black experiences marginalized from official histories make him one of our most important writers.

Conversations with John A. Williams collects twenty-three interviews with the three-time winner of the American Book Award, beginning with a discussion in 1969 of his early works and ending with a previously unpublished interview from 2005. Gathered from print periodicals as well as radio and television programs, these interviews address a range of topics, including anti-black violence, Williams's WWII naval service, race and publishing, interracial romance, Martin Luther King Jr., growing up in Syracuse, the Prix de Rome scandal, traveling in Africa and Europe, and his reputation as an angry black writer. The conversations prove valuable given how often Williams drew from his own life and career for his fiction. They display the integrity, social engagement, and artistic vision that make him a writer to be reckoned with.

Jeffrey Allen Tucker is associate professor in the Department of English at the University of Rochester. He is author of A Sense of Wonder: Samuel R. Delany, Race, Identity, and Difference and coeditor of Race Consciousness: African-American Studies for the New Century.