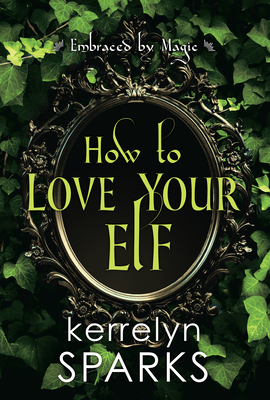 This is book number 1 in the Embraced by Magic series.

Raised in isolation on the magic-shrouded Isle of the Moon, five girls became five sisters. Now women, they are ready to claim their places in the world—and perhaps change it forever . . .

FLAME AND FORTUNE
Sorcha knew the mission was dangerous. Leaving the safe grounds of her brother’s kingdom and parlaying with the elves across their border . . . well, treachery seemed at least as likely as true peace. But to support her sister, Sorcha would brave far more than the underhanded ways of the elves. Or so she thought, before she was taken hostage.

Of course, her captors didn’t count on her particular abilities—or on the help of the Woodsman, the mysterious thief who made his home in the forest. He saw the battle from the trees, saw the soldier attacking against incredible odds to save a comrade—and then saw the valiant fighter revealed as Princess Sorcha of Norveshka. He can’t tell if he wants to kidnap her or kiss her. But despite Sorcha’s stubbornness, his inconvenient honor, and a rebellion on the cusp of full war, something burns between them that neither can let go . . .

“Sparks' crafting of distinct kingdoms and fantasy races is the strongest part of the series…An adventurous fantasy romp.”
—Kirkus Reviews

“Satisfying chemistry, a playful sense of adventure, and the threat of more danger to come keep the pages turning. Readers will revel in this fun, fast-paced fantasy romance.”
—Publishers Weekly

Kerrelyn Sparks is best known (so far) for the Love at Stake series, which has hit as high as number 5 on the New York Times bestseller list and 22 on USA Today. Kerrelyn lives with her family in the Greater Houston area of Texas. You can visit with her on Goodreads or her Facebook page, where she does a monthly contest. On Twitter, she posts as @KerrelynSparks.