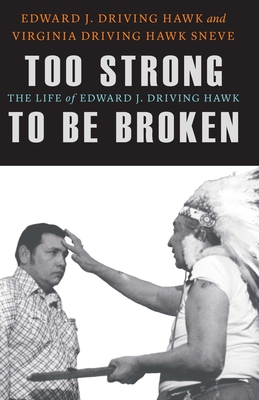 Too Strong to Be Broken explores the dynamic life of Edward J. Driving Hawk, a Vietnam and Korean War veteran, chairman of the Rosebud Sioux Tribe, former president of the National Congress of American Indians, husband, father, recovered alcoholic, and convicted felon.

Driving Hawk’s story begins with his childhood on the rural plains of South Dakota, then follows him as he travels back and forth to Asia for two wars and journeys across the Midwest and Southwest. In his positions of leadership back in the United States, Driving Hawk acted in the best interest of his community, even when sparring with South Dakota governor Bill Janklow and the FBI.

After retiring from public service, he started a construction business and helped create the United States Reservation Bank and Trust. Unfortunately, a key participant in the bank embezzled millions and fled, leaving Driving Hawk to take the blame. Rather than plead guilty to a crime he did not commit, the seventy-four-year-old grandfather went to prison for a year and a day, even as he suffered the debilitating effects of Agent Orange.

Driving Hawk fully believes that the spirits of his departed ancestors watched out for him during his twenty-year career in the U.S. Air Force, including his exposure to Agent Orange, and throughout his life as he survived surgeries, strokes, a tornado, a plane crash, and alcoholism. With the help of his sister, Virginia Driving Hawk Sneve, Driving Hawk recounts his life’s story alongside his wife, Carmen, and their five children.

Edward J. Driving Hawk is a Vietnam and Korean War veteran, former chairman of the Rosebud Sioux Tribe, and former president of the National Congress of American Indians. Virginia Driving Hawk Sneve is a well-known Lakota writer and a recipient of the 2000 National Humanities Medal. She is the author of many children’s books, and her memoir, Completing the Circle (Nebraska, 1995), won the North American Indian Prose Award.

"This book has value to anyone seeking to understand the public and private sides of a Native American leader in the twentieth and twenty-first centuries."—Michael J. Smith, Nebraska History

"Edward J. Driving Hawk lived a life worthy of your reading, and you will not be left unsatisfied."—Native Sun Times

“This book traces the rolls, loops, and wingovers in Driving Hawk’s sometimes dizzying flight path through turbulent skies. A modern Lakota leader and veteran of two wars, he took risks, soaring and scoring but also scarring and being scarred.”—Bunny McBride, author of award-winning Women of the Dawn and Molly Spotted Elk: A Penobscot in Paris