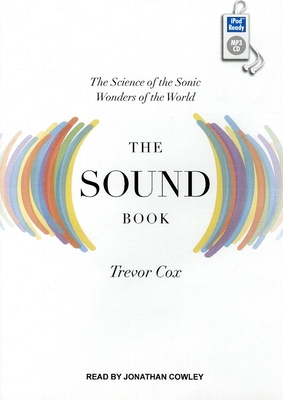 By Trevor Cox, Jonathan Cowley (Narrated by)
Out of Print

Trevor Cox is on a hunt for the sonic wonders of the world. A renowned expert who engineers classrooms and concert halls, Cox has made a career of eradicating bizarre and unwanted sounds. But after an epiphany in the London sewers, Cox now revels in exotic noises-creaking glaciers, whispering galleries, stalactite organs, musical roads, humming dunes, seals that sound like alien angels, and a Mayan pyramid that chirps like a bird. With forays into archaeology, neuroscience, biology, and design, Cox explains how sound is made and altered by the environment, how our body reacts to peculiar noises, and how these mysterious wonders illuminate sound's surprising dynamics in everyday settings-from your bedroom to the opera house. The Sound Book encourages us to become better listeners in a world dominated by the visual and to open our ears to the glorious cacophony all around us.

A professor of acoustic engineering, Trevor Cox has appeared on the Discovery and National Geographic channels, produced seventeen BBC radio documentaries, and holds the Guinness Record for discovering the world's "Longest Echo." He lives in Manchester, England.

Jonathan Cowley is a British actor whose recording of "The Tower, the Zoo and the Tortoise" by Julia Stuart earned him an "AudioFile" Earphones Award. He has narrated many audiobooks as well as film trailers and documentaries on both sides of the Atlantic.