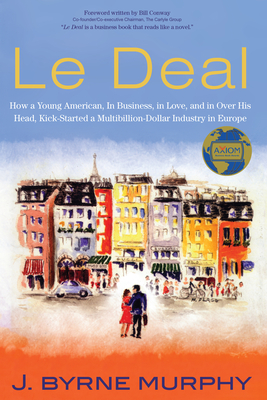 Le Deal is a business adventure story involving raw entrepreneurship and high-level politics. It is the true story of Byrne Murphy, a young businessman who abruptly moves to Paris in a quest to reignite his career and his fortunes. He quickly finds himself up against powerful forces, including wrestling with the Prime Minister of France, the soon-to-be Chancellor of Germany and wanna-be mafia in Italy. There are also charming encounters with the British Royal Family, including a near royal embarrassment of epic proportions. Eight years after Byrne's company, McArthurGlen Europe, was launched in his hotel room, it generated approximately $1 billion in sales from 11 centers across Europe; created nearly 8,000 jobs; opened 1,500 stores featuring 500 brands; attracted nearly 40 million shopping visits per year and spawned an array of competitors. In short, an industry was born. Along the way, the author learns what he, and Americans in general, do and do not know about life beyond our borders. The book offers a message for Americans who work internationally to truly take "context" into account; to realize, in our quest to accomplish more in less time, that investing the time to understand the nuances of the foreign cultures we are dealing with is key to prospering in our twenty-first-century multicultural, polyglot, interconnected, globalized world.