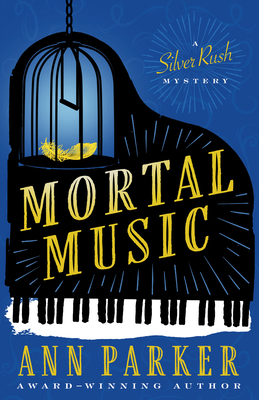 This is book number 7 in the Silver Rush Mysteries series.

In this next adventure in the award-winning Silver Rush mystery series, pianist and amateur sleuth Inez Stannert must track down a murderer before he silences a famous vocalist--forever...

All Inez Stannert wants for Christmas is for the struggling music store she owns in San Francisco to be a success. When diva Theia Carrington Drake asks Inez to be her accompanist for several high-profile personal appearances, Inez is thrilled. This is the chance she was waiting for--a way to make some extra money and bring her store into the limelight of the city's polite society. She hesitates to dream of what she could do from there--the other female business owners she could help.

But life around the singer is far from pitch perfect. An unknown threat is stalking Theia; her pet bird is found slain, and her signature gown is destroyed. Soon, Inez realizes that a murderer is stalking the city's opera halls, and that it's only a matter of time before Theia is his next victim. She'll have to enlist the help of San Francisco detective Wolter Roeland de Bruijn to solve this mystery of music and uncover the killer before Theia's celebrated voice is silenced--permanently.

When a famous vocalist's life is threatened, sleuth and pianist Inez Stannert will stop at nothing to find an answer to this mystery of music. But will she catch the killer before the music stops?