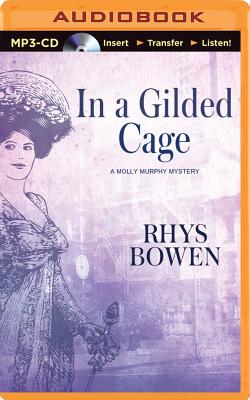 By Rhys Bowen, Nicola Barber (Read by)
Out of Print

This is book number 8 in the Molly Murphy Mysteries series.

Irish immigrant Molly Murphy and her New York City PI business are in the midst of a sweeping influenza epidemic and a fight for women's suffrage that lands her in jail. Her betrothed, Police Captain Daniel Sullivan, finds her, but he hardly has time to bail her out, what with Chinese gangs battling for control of a thriving opium trade. The only consolation Molly can take from her vexing afternoon in the clink is that it made her some new friends among the Vassar suffragists--and brought her a pair of new cases.

For the first, Emily Boswell is convinced her miserly uncle stole her inheritance and wants Molly to uncover the truth behind her parents' lives and deaths. Second, Emily's college roommate Fanny Poindexter wants Molly to find proof of her husband's philandering so that she can leave him without one red cent. But when Fanny dies and her husband claims she's a victim of the epidemic, it's more than Molly's conscience can take.

Rhys Bowen's Agatha and Anthony Award-winning historical series continues to breathe life into the past with its wit and charm and its complete sense of early twentieth century New York, which makes In a Gilded Cage her most accomplished mystery yet.