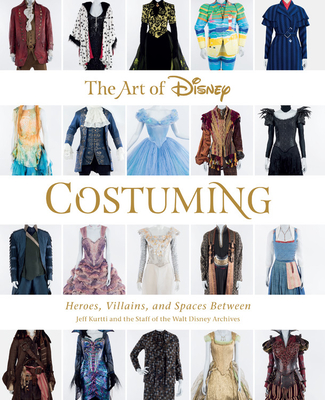 By Jeff Kurtti, Staff of the Walt Disney Archives
$45.00

Celebrate the imagination, passion, and attention to detail invested in each Disney costume within this gorgeous coffee table book!

The elegant and adventurous array of dresses, uniforms, and other attire is a feast for the eyes and a fascinating examination of pure craft and of the brilliant, creative minds behind it. The collection begins with a summation of the costumes created for Disney animation, early live action, and television, along with show wardrobes sported at the Disney Parks by Audio-Animatronics figures and Cast Members.

The next section details a timeless case study: Cinderella's ball gown. A diverse group of designers has been called upon over the years to address and improvise the creative and practical needs each time the fairy tale Cinderella has been reimagined. Each project has brought with it inherent cultural challenges when bringing a familiar and beloved tale to life again and again, and all have yielded stunning and distinct results. At last, the full galleries (organized by the character archetypes of heroes and villains, and those complex, always interesting, "spaces between") showcase costumes across more than thirty Disney films.

At each turn, this volume offers a one-of-a-kind backstage view of remarkable works of art, and it inspires a true appreciation for the highly skilled and talented costumers who created them.

Searching for that perfect gift for the movie fan in your life? Explore more behind-the-scenes stories from Disney Editions:

JEFF KURTTI is a leading authority on The Walt Disney Company, its founder, and its history. He is the author of more than thirty books, a writer-director of award-winning documentary content, and a respected public speaker. A Seattle native, Kurtti worked as a production coordinator on the 1984 Los Angeles Olympic Arts Festival, followed by two years as the assistant to the president of the California Institute of the Arts (CalArts). For several years, he worked for Walt Disney Imagineering, the theme park design division of The Walt Disney Company, and then for the Corporate Special Projects department of Disney. Since 1995 Kurtti has enjoyed a career as an author, writer, and consultant in the motion picture, theater, and theme park entertainment industries. He was creative director, content consultant, and media producer for The Walt Disney Family Museum in San Francisco and a producer of The Boys: The Sherman Brothers Story, a critically acclaimed documentary about the famed songwriters.

THE WALT DISNEY ARCHIVES was established by Roy O. Disney, Walt Disney's brother and Chairman of Board, who determined that significant assets and documents relating to the history of The Walt Disney Company should be gathered and preserved, and that the recollections of key employees should be documented. Chief Archivist Emeritus Dave Smith was officially hired for this purpose on June 22, 1970, and since then, the Walt Disney Archives has curated millions of historic items, including books, art, awards, photographs, merchandise, props, costumes, and much more. The Archives team has assisted in research and review of hundreds of scholarly and documentary works in varied media and produced numerous exhibits for the presentation of the The Walt Disney Company's respected and beloved history to the public.

". . . a perfect gift for any Disney fan (even if it’s you, yourself)."
—<strong>Leonard Maltin</strong>, film critic and historian

"This is a book I have wanted to own for about the last 20 years! . . . ready be picked and arranged on your Christmas mantelpiece!"
—<strong>Brian Sibley</strong>, writer, broadcaster, and Disney scholar

PRAISE FOR PRACTICALLY POPPINS IN EVERY WAY

"Practically Poppins goes above and beyond the mandate of a movie tie-in to become a valuable book for any Mary Poppins fan."—<strong>Leonard Maltin</strong>, film critic and historian

PRAISE FOR PRACTICALLY POPPINS IN EVERY WAY

"This coffee table–worthy book by Jeff Kurtti is much more than a visually appealing celebration of the franchise."—<strong>Broadway Direct</strong>

PRAISE FOR THE ART OF MULAN

". . . chronicles the production team’s research trip to China and the creative development of the pic . . ."—<strong>Variety</strong>

PRAISE FOR THE ART OF DISNEY COSTUMING"Alongside gorgeous photos of the costumes are close-ups that reveal design elements that you never would have noticed on the screen. . . . Beyond the photographic details are insightful comments from the designers too. . . . Every costume in the book possesses that notable spark of the creative process that takes the form of cloth and thread. . . . Another striking thing is the wide array of costumes the authors chose. It runs the gamut from Dorothy’s costume in 1985’s Return to Oz, to the Genie, Aladdin, and Jasmine from this year’s live-action Aladdin. The sampling truly gives a breathtaking look at the field of costume design, especially when it comes to the fantasy worlds in which these characters live."—<strong>Brit + Co.</strong>

PRAISE FOR THE ART OF DISNEY COSTUMING"Even though the detailed coverage delves into films that were not critically or commercially well-received, the focus is on the extraordinary craftsmanship that went into the costumes, which were often the best part of the viewing experience. Disney fans may well appreciate this unusual theme, while readers passionate about costume history and design are probably the best-suited audience."—<strong><em>Booklist</em></strong>

PRAISE FOR THE ART OF DISNEY COSTUMING"It may be surprising for many that the core subject of this new book is live-action films from the past three decades or so and not the animated classics. Director of the Walt Disney Archives Rebecca Cline explains: 'We wanted to move the story forward here, and bring the current Disney not of the Walt era into the spotlight. It allowed us to really focus on the best in design and craft in the current Disney cinematic canon—and frankly, in the current cinematic canon, period. These are today’s top costuming talents, at the peak of their form.' Explore the characters, stories, history, and currency of Disney in a whole new way, and with a different and new appreciation."—<strong>Nerds and Beyond</strong>

PRAISE FOR THE ART OF DISNEY COSTUMING"A pure and nostalgic pleasure to simply browse through, The Art of Disney Costuming: Heroes, Villains, and Spaces Between is impressively informative and . . . would be an especially appropriate and enduringly popular selection for library Memorial Fund acquisitions. Simply stated, The Art of Disney Costuming is unreservedly endorsed and recommended for personal, community, college, and academic library collections."
—<strong>Reviewer's Bookwatch, <em>Midwest Book Review</em></strong>