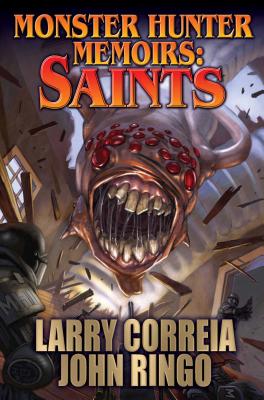 This is book number 3 in the Monster Hunter Memoirs series.

SAINTS AND MONSTERS COME MARCHING IN

Everything is different in New Orleans. The food. The climate. The monsters. But that’s just the beginning. The real reason New Orleans is so different is a larval Great Old One growing day by day in power and just about ready to pop. If monster hunter Chad Gardenier can’t convince “the powers that be” to get involved, not only New Orleans, but the entire world is going to fall. Now on the outs with the U.S. Government and in exile from his usual job of saving the world, Chad must rally the forces of light against the coming darkness.

About Black Tide Rising series entry Under a Graveyard Sky by John Ringo:

“If you think the zombie apocalypse will never happen, if you’ve never been afraid of zombies, you may change your mind after reading Under a Graveyard Sky . . . Events build slowly in the book at the outset, but you can’t stop reading because it’s like watching a train wreck in slow motion: inexorable and horrible. And the zombie apocalypse in these pages is so fascinating that you can’t stop flipping pages to see what happens next.”—Bookhound

“[Ringo’s work is] peopled with three-dimensional characters and spiced with personal drama as well as tactical finesse.”—Library Journal

“. . . practically impossible not to read in one sitting . . . exceedingly impressive . . . executed with skill, verve, and wit.”—Booklist

John Ringo is the New York Times best-selling author of the Black Tide Rising series, the Posleen War series, the Through the Looking Glass series, and more, including the Troy Rising series, of which Live Free or Die is the first installment. A veteran of the 82nd Airborne, Ringo brings firsthand knowledge of military operations to his fiction.