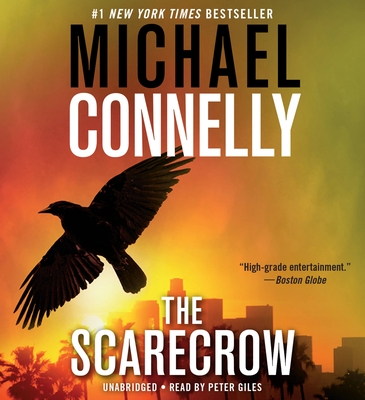 By Michael Connelly, Peter Giles (Read by)
Out of Print

"Michael Connelly...has the nerve and timing of a whole SWAT team."--New York Times

"Michael Connelly...adds the intricate plotting and perfect-pitch dialogue that keeps The Scarecrow scary. Together, they hook the reader early and never let up."--Philadelphia Inquirer

Jack is soon running with his biggest story since The Poetmade his career years ago. He is tracking a killer who operates completely below police radar-and with perfect knowledge of any move against him. Including Jack's.

Michael Connelly is the author of twenty-nine novels, including #1 New York Times bestsellers The Wrong Side of Goodbye and The Crossing. His books, which include the Harry Bosch series and Lincoln Lawyer series, have sold more than sixty million copies worldwide. Connelly is a former newspaper reporter who has won numerous awards for his journalism and his novels and is the executive producer of Bosch, starring Titus Welliver. He spends his time in California and Florida.

"If any novelist is worthy to walk once more through the front door of
Raymond Chandler's iconic Sternwood mansion, it's Michael Connelly."—Washington Post

"Michael Connelly is the master of the universe
in which he lives, and that is the sphere of crime thrillers. This man
is so good at what he does."—Huffington Post