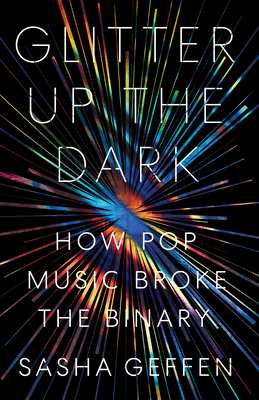 Why has music so often served as an accomplice to transcendent expressions of gender? Why did the query "is he musical?" become code, in the twentieth century, for "is he gay?" Why is music so inherently queer? For Sasha Geffen, the answers lie, in part, in music’s intrinsic quality of subliminal expression, which, through paradox and contradiction, allows rigid gender roles to fall away in a sensual and ambiguous exchange between performer and listener. Glitter Up the Dark traces the history of this gender fluidity in pop music from the early twentieth century to the present day.

Starting with early blues and the Beatles and continuing with performers such as David Bowie, Prince, Missy Elliot, and Frank Ocean, Geffen explores how artists have used music, fashion, language, and technology to break out of the confines mandated by gender essentialism and establish the voice as the primary expression of gender transgression. From glam rock and punk to disco, techno, and hip-hop, music helped set the stage for today’s conversations about trans rights and recognition of nonbinary and third-gender identities. Glitter Up the Dark takes a long look back at the path that led here.

Sasha Geffen is a writer based in Colorado. Their work focuses on the intersections between pop culture and gender and has appeared in Rolling Stone, Pitchfork, Artforum, theNation, and theNew Inquiry, among others.

A must-read for all those interested in the politics of sound.
— The Guardian

This is how Glitter Up the Dark, and all of Geffen’s writing, works: Once you start reading it, you’ll hear the world through new ears. You’ll devour Glitter Up the Dark with eyes wide and mind racing, drawing connections to whatever music you listen to. It’s exciting. And if you’re a queer or trans listener, it’s validating reading about how generations of us have found a haven in music.
— Vulture

[Glitter Up the Dark] speaks to pop music’s effect on future generations of norm-breaking artists, but also on public perceptions of gender and its engagement with race and class politics. It’s an essential contribution to the modern music-book canon, made all the more intimate in Geffen’s hands.
— Pitchfork, "Our 15 Favorite Music Books of 2020"

[Glitter Up the Dark] is a unique examination of gender fluidity and queerness across genres of popular music; a must-read for music lovers.
— Ms. Magazine

[Glitter Up the Dark] doesn't just discuss various subversions of typical masculine and feminine gender roles—it discusses how we came to accept the full gender spectrum with non-binary and third gender identities. Geffen chronicles gender fluidity in music from the 20th century to the present, discussing everyone from early blues artists and David Bowie to Missy Elliot and riot grrrl bands.
— Paste Magazine

From Little Richard and Elvis to David Bowie and Prince, Glitter Up The Dark shows how artists have used music and its accompanying fashion and technology to subvert traditionally accepted forms of sexual identity—including what Geffen calls “audio drag,” wherein musicians inhabit shifting personas through vocal manipulation. While Geffen is more than comfortable digging into headier gender theory, the book remains accessible and well-crafted.
— The A.V. Club

Through deft yet largely accessible analysis, Glitter Up the Dark feels like a revelatory unearthing, as Geffen carefully exposes threads of queerness that typical histories may choose to ignore or erase.
— them

Glitter Up the Dark is not just a chronicle of the transgressive possibilities of pop music but also a history of Geffen’s listening and a demand that we regard pop culture in explicitly political terms.
— The Nation

Without attempting a comprehensive overview of queerness in music, Glitter Up the Dark nevertheless traces a clear path from the Beatles onwards...Whether it's the time-shifting energy of '70s New York clubs like the Loft, the 'sapphic androgyny' of Prince, or the gay masculine identification channeled through Grace Jones's 'I Need A Man,' Geffen makes clear that performers and their listeners have always been engaged in a lively, flirtatious exchange, constructing vibrant, expressive, and more fluid worlds in the space between each reverberating sound wave.
— Nylon

An essential contribution to the modern music-book canon, made all the more intimate in Sasha Geffen’s hands.
— Pitchfork

This slim yet sprawling volume...overturns traditional approaches to pop-music history by revisiting popular stars, songs and genres through a gender-expansive, queer lens
— Westword

[Glitter Up the Dark] tells the story of queer artists and fans carving out space for their self-expression in an industry that capitalizes on pieces of the queer aesthetic, while simultaneously writing off those artists who are deemed too subversive or political.
— Jezebel

[An] ambitious first book...with Geffen’s boundless love for music, deep listening skills, and expansive knowledge, they have queered the map of pop in language as accessible as a yellow brick road.
— Lambda Literary

Geffen’s clear love and deep knowledge of the subject, along with insightful historical and critical arguments about the intertwining of gender and music, make this a deliciously necessary read for anyone interested in either pop culture or gender studies.
— Library Journal, Starred Review

Glitter Up the Dark is Geffen's definitive love letter to the power of music to inspire acceptance and transformation—both within ourselves, and in the world around us.
— Foreword Reviews

In an expansive and exuberant history Sasha Geffen celebrates music's liberatory potential to break down binary gender roles.
— The Wire

Geffen drags a shimmering thread that connects transgressive music histories that have defined not just queer culture but all of pop culture for decades...Geffen’s book feels like the most fabulous tasting menu that will inspire readers to fall down the rabbit holes of so many of these stories.
— Autostraddle

[Glitter Up the Dark] details, era by era, just how much popular music has done to break down the gender binary...one of the things I loved about the book is how Geffen celebrates the way that challenging the binary is inherent to the appeal of pop music for all people who approach it with open ears and hearts: it clears a space for all of us to more truly understand the human experience.
— The Current

[An] incisive first book…[Geffen's] lucid prose is frequently enlivened by small, passing insights into music I’ve encountered a million times but will now forever hear refracted through their imagery and words…What I found most valuable about Glitter Up the Dark was the lens through which it looks back and invites us to notice how such seeming 'subversions' have always been present beneath the surface of even the most popular music...Reading this book often gave me the sensation that I was looking at a familiar scene through a kaleidoscope, suddenly seeing smeared borders and tiny, winking rainbows everywhere.
— Bookforum

Glitter Up the Dark is less a straightforward narrative of pop music gender play and nonconformity than a spiraling, exhilarating dance through its more and less famous manifestations...This prism of a book reflects a rainbow on all it touches.
— Boston Globe

Glitter Up the Dark helps readers understand and contextualize gender performance in popular music. It might change the way you listen to and engage with your favorite records.
— The Arts Fuse

A brilliant, highly accessible, and timely testament to the power of music to shatter the status quo.
— Library Journal, "Best Arts Books of 2020"

This exploration of queerness and pop is ridiculously comprehensive...Geffen’s examination of gender ambiguity’s relationship to artistic reinvention is a fascinating read. You’ll never listen to classic genre-staples in the same way again.
— NME, "The 20 best music books of 2020"

Geffen's genuine enthusiasm for transgressive pop music is clear and infectious, and the chapters on punk and glam rock...are true standouts. [Glitter Up the Dark] is full of insightful observations, such as the pivotal role that Wendy Carlos and Pauline Oliveros played in the development of electronic music...A helpful guided tour that shows how music is the perfect art form in which to 'dance between genders.'
— Kirkus

Glitter Up the Dark...asks a fascinating question, one the author turns over and over for 264 fascinating pages. What is it about popular music that makes it such a uniquely freeing space for artists to explore the gender spectrum? Geffen takes a fascinating walk through music history from the queer pioneers of rock and blues; to the Beatles and their matching mop tops; to 21st century artists like Perfume Genius and Fever Ray.
— The Current, "Best music books of 2020"

From the castrati of mid-sixteenth century Italy to 'Ma' Rainey’s lesbian blues to SoundCloud’s shape-shifting stars, Geffen takes readers on an illuminating journey in lyrical, punkish prose.
— Elle, "The 63 Best Books of 2020"