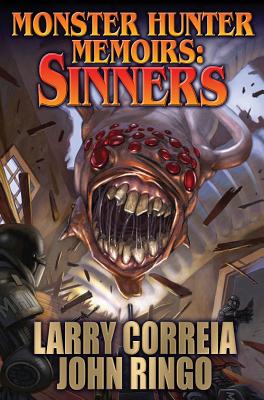 This is book number 2 in the Monster Hunter Memoirs series.

NIGHTMARE IN THE BIG EASY

With New Orleans out of control, Chad Oliver Gardenier, one of Monster Hunter International’s premier hunters, has been dispatched from Seattle to reinforce the beleaguered members of MHI'S Hoodoo Squad in their fight against the darkness.

Chad had once taken a werewolf while wearing only jogging gear. With half a dozen or more loup garou appearing every full moon, mysterious shadow demons, houdoun necromancers, fifty-foot bipedal crocodiles showing up every couple of months and more vampires than a Goth concert, New Orleans in the '80s gives a whole new perspective to the term “Hell on Earth.” In fact, more monsters are popping up than crawfish at a fais do do! Chad may be able to collect enormous bounties for the monsters he kills. But there’s one catch: he has to stay alive to do it!

“If you think the zombie apocalypse will never happen, if you’ve never been afraid of zombies, you may change your mind after reading Under a Graveyard Sky . . . Events build slowly in the book at the outset, but you can’t stop reading because it’s like watching a train wreck in slow motion: inexorable and horrible. And the zombie apocalypse in these pages is so fascinating that you can’t stop flipping pages to see what happens next.”—Bookhound

About John Ringo:
“[Ringo’s work is] peopled with three-dimensional characters and spiced with personal drama as well as tactical finesse.”—Library Journal

“. . . practically impossible not to read in one sitting . . . exceedingly impressive . . . executed with skill, verve, and wit.”—Booklist