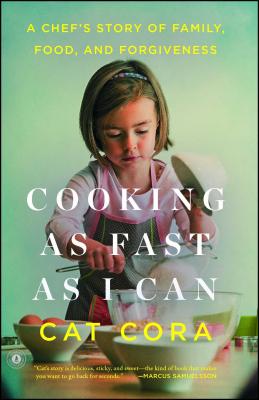 By Cat Cora
for information about purchasing this book, please contact orders@bookpassage.com

“Affecting…as warm and comforting as a home-cooked meal” (People), a no-holds-barred memoir on Southern life, Greek heritage, same sex marriage—and the meals that have shaped her memories—from the Food Network star and first female winner of Iron Chef, Cat Cora.

Before she became a renowned chef and Food Network star, Cat Cora was just a girl from Jackson, Mississippi, where days were slow and every meal was made from scratch. By the age of fifteen, Cora was writing the business plan for her first restaurant. Her love of cooking started in her Greek home, where fresh feta and home-cured olives graced the table. Cat spent her days internalizing the dishes that would form the cornerstone of her cooking philosophy—from crispy fried chicken and honey-drenched biscuits to spanakopita. But outside the kitchen, Cat’s life was volatile.

In Cooking as Fast as I Can, Cat Cora reveals the experiences that shaped her life—from early childhood sexual abuse to the realities of life as lesbian in the deep South. She chronicles how she found her passion in the kitchen and went on to attend the prestigious Culinary Institute of America and apprentice under Michelin star chefs in France. After her big break as a co-host with Rocco Di Spirito on the Food Network’s Melting Pot, Cat broke barriers by becoming the first-ever female contestant on Iron Chef.

By turns epic and intimate, Cat writes movingly about how she found courage and redemption in the dark truths of her past and about how she found solace in the kitchen and work, how her passion for cooking helped her to overcome hardships and ultimately find happiness at home and became a wife and a mother to four boys. Above all, this is “a disarmingly candid look at the highs, lows, and true grit of a culinary star” (Kirkus Reviews).

Cat Cora grew up in Jackson, Mississippi, and attended the Culinary Institute of America and worked in New York City before travelling overseas to apprentice in Europe with world-renowned French chefs Georges Blanc and Roger Vergé. She settled in Napa Valley in her first job as a chef. After The Food Network discovered her in 1999, she went on to become the first female Iron Chef for the Network. She is the founder of the charitable organization Chefs for Humanity, a grassroots organization that mobilizes chefs to lend their skills to communities in need, and she has built a brand that includes two food lines, cookware a shoe line, cookbooks and restaurants, in Orlando, Costa Mesa, Houston, Salt Lake City, San Francisco, Atlanta, and Singapore. She lives in Santa Barbara.