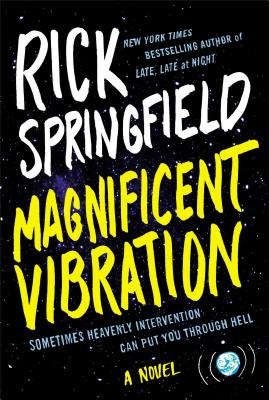 By Rick Springfield
$24.99
Email or call for price

After making an unexpected connection with God via his cell phone, one man embarks on an unlikely spiritual quest in this smart, savvy, rambunctious debut from Grammy Award-winning musician and New York Times bestselling author Rick Springfield.

Why are we here? What is love? Is there a loch ness monster? Does God send text messages?

After stealing a mysterious self-help book called Magnificent Vibration: Discover Your True Purpose from a bookstore, Bobby calls the 1-800 number scrawled inside the front cover, only to discover that he has a direct line to God. This launches Bobby on an unlikely quest, serendipitously accompanied by a breathtakingly sexy and exceedingly sharp travel companion named Alice. Together the pair sets out to find some combination of spiritual and carnal salvation—and possibly save the planet.

By turns hilarious, poignant, over-the-top, and deeply meaningful, Magnificent Vibration is a highly original novel about the biggest questions one man—or mankind—has ever asked.

Rick Springfield is a Grammy Award–winning musician and actor, and the author of the New York Times bestselling memoir Late, Late Night, which Rolling Stone named one of the twenty-five greatest rock memoirs off all time. He lives in Malibu with his wife, Barbara. Visit him online at RickSpringfield.com or MagnificentVibration.com.

“Rick Springfield's fiction debut, MAGNIFICENT VIBRATION, is a rollicking romp of a book. His view of divine intervention may not be mine, but his storytelling shines in this clever, entertaining – and sometimes surprisingly enlightening – first novel.”
— Mitch Albom, author of the #1 New York Times bestselling novel, The First Phone Call from Heaven

“Forget all the Old and New Testament tales. The Bible’s latest installment, Magnificent Vibration, is a thought-provoking and clever take on how the Almighty actually runs the universe, or universes. God’s cell phone number, personified sexual organs and a conclusion that is surprising and dire, and somehow hilarious, are just some of the madness that make Rick Springfield’s debut novel a romp.”
— Jon Methven, author of This Is Your Captain Speaking

“A surprising odyssey through the no man’s land between religion and pop culture, MAGNIFICENT VIBRATION is by turns racy, sacrilegious, sweet, and sincere. If you’ve been searching for a novel about God, sex, and the Loch Ness Monster, Rick Springfield’s irreverent debut is for you.”
— Peter Manseau, author of Songs for the Butcher’s Daughter

“Combines the comedic elements of PhilipRoth’s Portnoy’s Complaint with the subversive ontological questioning of KingDavid in Joseph Heller’s God Knows.”

“This is not the prose of a rock star who decided totry his hand at novel writing, but of a novelist who just happens to be a rockstar.”

“Springfield’s outrageous, imaginative tale willappeal to fans of Douglas Adams. A strange one, but one with heart.”

“With shades of The Hitchhiker’s Guide to theGalaxy (1979) and the clever, self-deprecating wit of Augusten Burroughsand Max Barry, Springfield’s highly original work is the rare antidote to thecelebrity ghostwritten books…Captivating, poignant, and hilarious, MagnificentVibration proves that some of the most interesting stories can come frompretty unlikely places.”