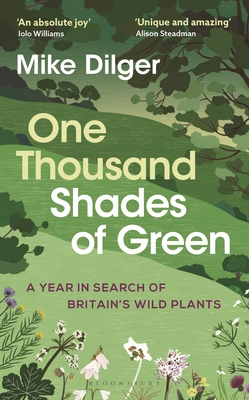 An insightful assessment of the nation's flora, following Mike Dilger's quest to find 1,000 plant species over the course of a year.

For most of 2020, Mike Dilger's normal day-job of travelling to the four corners of the British Isles to film wildlife for The One Show all but disappeared, limiting his daily wildlife fixes to those short walks to and from home with son and dog. With his wings clipped, he couldn't shake the feeling he was missing out and even felt he was suffering from some form of 'nature deficit disorder'. But as spring slowly turned to summer, the simple pleasure of getting to know the wild plants on his own local patch turned his daily exercise from being somewhat tedious to utterly enthralling.

Realising how little he knew about the wild plants just beyond his doorstep became the catalyst for reigniting a long-buried botanical passion.

With the arrival of 2021 and a third lockdown, Mike decides to pack an eye lens and plant book alongside his trusty binoculars to see as many of our wild plants as possible, with 1,000 species the steep target. With the 'plant race' running for an entire calendar year, he joins up with other hardcore botanists, pointing him towards good sites with impressive plant lists and even precise coordinates for twitching for a small, select range of marquee species. During the course of the year he meets up with the resilient reserve wardens and courageous conservationists tasked with protecting some of the nations' richest botanical sites, and experiences first-hand the many difficulties associated with saving our rarest and most charismatic plants.

Mike Dilger is one of wildlife TV's best-known presenters, in his role as resident wildlife reporter on BBC One's primetime current affairs show, The One Show, since 2007.

As well as being an experienced TV presenter, Mike has travelled widely in South America and Southeast Asia on ecological expeditions, sometimes in front of the camera, sometimes behind.