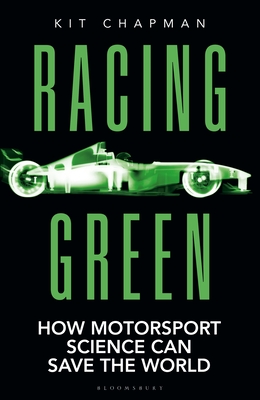 Racing Green is the story of how motorsport science has become smarter and more environmentally friendly, and how these developments on the track are changing the world.

Motor racing is one of the world's most watched sports. In the United States alone, NASCAR has over 75 million fans and counting. It's also the most scientifically demanding sport on Earth, requiring a combination of peak physical and mental skill, world-class engineers and a constant drive for technological innovation.

Racing Green explores the science that has been translated from racing to the road, from the early 19th century through to innovations such as electric cars and autonomous vehicles. The history of motor racing, both its glories and its tragedies, led to some of the most important modern developments we see in car design today. Just as the heartbreaking death of Dale Earnhardt at the Daytona 500 led NASCAR to introduce a new raceway barrier method, ideas pioneered during races – such as crush zones to crash helmets – have been incorporated into race car and track designs around the world. Cleaner technologies first trialed and improved in modern racing are also shaping our communities beyond the track, from the hidden aerodynamics in everything from your grocery aisle to Apple's new $5 billion headquarters to a Porsche made from flax and tires made from dandelions.

Through exclusive interviews with NASCAR's Research and Development Center, Formula 1 insiders, engineers, scientists and drivers, lifelong motorsport fan Kit Chapman goes behind the scenes of the current breakthroughs to show where motorsport is likely to take us in the future, picking up extraordinary tales along the way, such as the Ohio State University's experimental electric car, the Buckeye Bullet, which broke the electric land speed record on the salt flats in Utah, hitting an astounding 340 mph, and the untold story of how motorsport used its unparalleled mechanical expertise to help during the COVID-19 pandemic.

Racing Green is a mix of travelogue and historical retrospective, combining visits to the experts and discussing the science with retellings of real-life incidents that represent milestones in shaping the modern world.

Dr Kit Chapman is an award-winning journalist and adventurer. With more than a decade of experience writing for titles such as Nature, New Scientist, Chemistry World, Physics World and the Daily Telegraph, his work has taken him to more than 60 countries as he seeks amazing tales from the cutting edge of science. He has interviewed more than a dozen Nobel prize winners, been inside the world's fastest computer and once convinced an Oscar-winning actress he was a cyborg. Kit has a PhD in the history and philosophy of science from the University of Sunderland and a masters degree in pharmacy from the University of Bradford. His first book Superheavy was listed as one of Publisher's Weekly's top 10 science books for Fall 2019 and a finalist for the AAAS/Subaru Prize for Excellence in Science books.

“Chapman writes engagingly about the benefits motor racing has brought to a climate problem that needs all hands on the wheel.” —Financial Times

“An entertaining and often insightful read that will be enjoyed by both racing fans and people generally interested in processes of innovation.” —Science

“A reminder of the crucial role that motorsport plays in the mission to save our planet.” —Lucas di Grassi

“Chapman expertly places scientific developments in societal and historical contexts while making you feel like he's sharing stories over beer at the local pub … If you're not a racing fan, you probably know one. Racing Green would be an excellent way to get them interested in the science behind the cars. But I also highly recommend Chapman's book to scientists as a case study in how story can be just as powerful a force for change as fact.” —Diandra Leslie-Pelecky, Physics World

“Chapman's clear passion for all things motorsport seeps heavily through the narrative of this book, and he engagingly walks us through the history of motorsport, and the extraordinary engineering that goes into all the materials and parts.” —Engineering & Technology