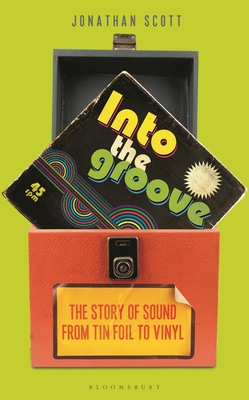 The story of recorded sound--the technological developments, the humans that made them happen and their impact on society, from the phonograph to LPs, EPs and the recent resurgence of vinyl.

In Into the Groove, vinyl collector and music buff Jonathan Scott dissects a mind-blowing feat that we all take for granted today--the domestication of sound. Thomas Edison's phonograph, the first device that could both record and reproduce sound, represented an important turning point in the story of recorded sound, but it was only the tip of the iceberg, and came after decades of invention, tinkering and experimentation. Scott traces the birth of sound back to the earliest serious attempts in the 1850s, celebrating the ingenuity, rivalries and science of the modulated groove.

He examines the first attempts to record and reproduce sounds, the origins of the phonograph, and the development of commercial shellac discs. Then he divulges the fascinating story of the LP record, from the rise of electric recording to the fall of 7-inch vinyl, the competing speed and format wars, and an epilogue that takes the story up to the present-day return of vinyl to vogue.

Into the Groove uncovers tales of intrigue and betrayal, court battles and lesser-known names who are often left out of most histories. Discover a new appreciation of the not-so-simple black disc that holds a special place in the history of music and sound.

Jonathan Scott is a music journalist who has been collecting vinyl since he was seven years old. He's written about weird, rare and collectable records for Record Collector, has edited books about Prince, Jefferson Airplane and The Grateful Dead, and has written about Nirvana, The Venga Boys and lots of others in between. Jonathan's first book, The Vinyl Frontier, told the story of NASA's 'golden record' on the Voyager missions.

“An audio geek's delight, this engrossing history of music and voice recording is as wide-ranging and thorough as one could want … Scott spins a history told with near-perfect pitch.” —Kirkus Reviews (starred review)