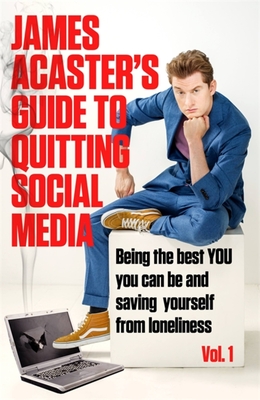 This is a self-help book like no other. Because you are not helping yourself, James Acaster is helping you.

In 2019, James quit all forms of social media - covering his phone in tar and driving it to a lock-up in Rhyl, before setting up home in a castle he'd built himself called Castle Anti-Net. But when the withdrawal symptoms hit him, he realised in order to stay clean he'd have to replace everything social media gave him with three-dimensional, real-life activities.

Employing the help of a mysterious, wealthy benefactor named Clancy Dellahue, and an ever-growing gang of misfits (aka the Tangfastic Crew), James found ways to replace his online friends (he joined the scouts) and spy on his exes (climbing ropes, zip lines, fake moustache) as well as anonymously bullying strangers, seeing photos of everyone's dogs, getting public figures fired, arguing with everybody about everything, and so much more.

His life is amazing and yours could be too if you buy JAMES ACASTER'S GUIDE TO QUITTING SOCIAL MEDIA, BEING THE BEST YOU YOU CAN BE AND SAVING YOURSELF FROM LONELINESS VOL. 1.

James Acaster was born in Kettering, Northamptonshire in 1985.
He left school age 17 so he could play drums in a band called The Wow! Scenario with his friend Graeme. Three people, including the people in the band, liked the band. He began performing stand-up comedy in January 2008. He has been nominated for the Edinburgh Comedy Award five times and has appeared on Mock The Week, Have I Got News For You, Live At The Apollo and Russell Howard's Good News.