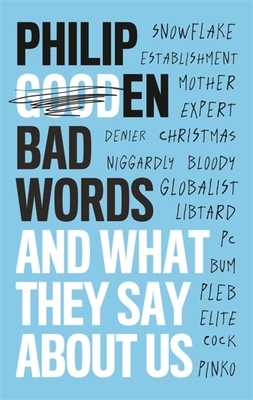 Once upon a time, the worst words you could utter were short, simple and tended to be four letters in length. Now things are more complicated. To be insulted as a 'snowflake' or an 'expert' is arguably worse than being called a **** or a **** or even a ****.


So what are today's 'bad words' and how are they different from yesterday's taboo expressions? This entertaining guide to the shifting sands of bad language is indispensable in an increasingly divided world in which abuse becomes ever more widespread and vituperative.

Philip Gooden shows how and why taboo words and contentious expressions, including those four-letter ones, were first used in English. He discusses the ways such words have changed over the years and explores how a single syllable or two may possess an almost magical power to offend, distress or infuriate.

Bad Words investigates the most controversial and provocative words in the English language in a way that is both anecdotal and analytical. Combining intrigue and scandal, the book delves into expressions connected to religion, ethnicity, nationality, politics, swearing and oaths, and includes contemporary issues like political correctness and elitism.

PHILIP GOODEN is a graduate of Magdalen College, Oxford. He writes books about language as well as historical crime novels. The former include Who's Whose?A No-Nonsense Guide to Easily-Confused Words, The Story of English, and (as co-author) Idiomantics and The Word at War. He has been nominated for a CWA Ellis Peters Historical Dagger Award.

From the article 'Sticks and Stones' in The Economist, titled 'The polarisation of politics has led to a new lexicon of insults' in the online edition.
'A watershed moment has arrived: traditional taboo words, pertaining to the body and excrement, no longer have the punch of group-based insults related to sex, disabilities and other such qualities, about which Western societies are increasingly sensitive. (Race-based gibes have been anathema for a while.)

'The evolution of insults is the subject of Philip Gooden's new book, Bad Words. He recounts in one neat reversal the turn in the history of invective. The Sun, a British tabloid, was once in the habit of outing gay people, and even publicly defended its use of "poof" in doing so (because, the paper argued, its readers used the word, too). How times change. After abandoning the practice of outing in 1998, in 2018 the paper led a campaign to track down a bus-driver who called a reality-show star a "poofter". What it once considered lighthearted banter is now verboten homophobia.'