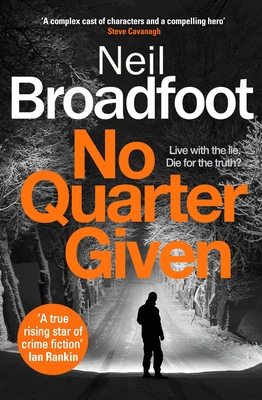 She was lying in the road when he found her, crumpled and broken, the car that hit her screaming away from the scene in haze of tyre smoke and exhaust fumes...

Jennifer MacKenzie being hit by a car was a tragic accident. Or so it seemed. Until Connor is summoned to a meeting his girlfriend's dad, Duncan McKenzie. MacKenzie claims that Jen's accident was actually a message intended for him - and a way to force him to kill his trusted lieutenant Paulie King, who has now mysteriously disappeared.

His request to Connor is simple. Find Paulie and the men who hurt his daughter. Do whatever it takes.
As an all-out gang war threatens to explode across Central Scotland, Connor begins a journey that forces him to confront some uncomfortable truths about his girlfriend and the family he is connected to through her. But Connor is also driven by a vow - to find Paulie. And when he does, no quarter will be given.

Neil Broadfoot worked as a journalist for 15 years at both national and local newspapers, including The Scotsman, Scotland on Sunday and the Evening News, covering some of the biggest stories of the day.

Falling Fast, which was shortlisted for the Dundee International Book Prize, is the first in the Edinburgh-set McGregor and Drummond series of thrillers.

His new Stirling-set series, which begins with No Man's Land and features close protection expert Connor Fraser, has been hailed as "tense, fast moving and bloody" and "atmospheric, twisty and explosive" with a "complex cast of characters and a compelling hero". No Man's Land was longlisted for the 2019 McIlvanney Award.

As a father of two girls, Neil finds himself regularly outnumbered in his own home. He is also one of the Four Blokes In Search of a Plot, a quartet of crime writers who live write a story based on suggestions from the audience. The Four Blokes have appeared in England, Spain and Scotland, including at the Glasgow International Comedy Festival.