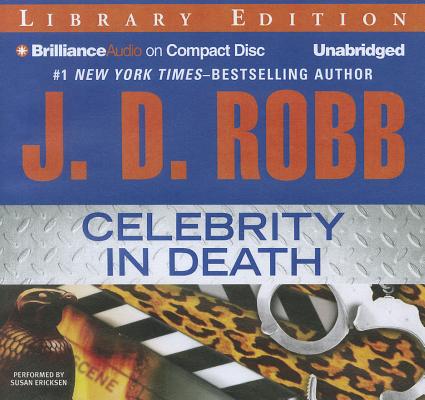 This is book number 34 in the In Death series.

Her career in homicide has taken her into the darkest depths of New York City's underground--and sometimes Lieutenant Eve Dallas feels more comfortable in those kinds of places than in the high-rise, high-society world of her billionaire husband, Roarke.

But while she's no party girl, she's managing to have a reasonably good time at the celebrity-packed bash celebrating the debut of The Icove Agenda. This time it's Eve, not Roarke, who's a guest of honor, since the film is based on one of her famous cases. Her partner, Peabody, is practically giddy over rubbing shoulders with Hollywood royalty. Eve, on the other hand, is more likely to roll her eyes than have stars in them. But she has to admit it's a little spooky seeing the actress playing her, who looks almost like her long-lost twin.

Not as unsettling, though, as seeing K. T. Harris, the actress who plays Peabody--drowned in the lap pool on the roof of the director's luxury building. Talented but rude, and widely disliked, K.T. had made an embarrassing scene during dinner. She clearly liked being the center of attention. Now she's at the center of a crime scene--and Eve is more than ready to get out of her high heels and strap on her holster, to step into the role she was born to play: cop.