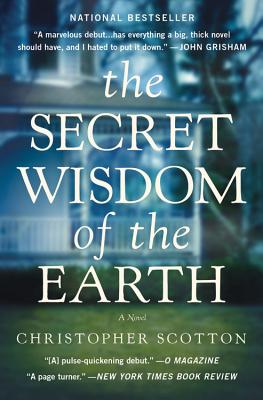 By Christopher Scotton
for information about purchasing this book, please contact orders@bookpassage.com

“Struggling to recover from the trauma of his baby brother's tragic death, Kevin and his broken mother relocate to Medger, Kentucky, for the summer. Their return to the Appalachian coal town in which their family is deeply rooted is intended to heal them both. While Kevin's grandfather is just the person and the wild hollows surrounding their little town just the place to help him mend, Kevin finds that Medger and its citizens are in need of healing as well. Poverty, a mountaintop removal operation, and desperation are tearing their town and the land around it apart. Scotton's finely wrought characters, perfectly paced plot, and keen sense of place make The Secret Wisdom of the Earth resonate with the reader long after the book has been finished.”
— Catherine Weller, Weller Book Works, Salt Lake City, UT

"A marvelous debut...has everything a big, thick novel should have, and I hated to put it down." -- John Grisham

For readers of The Story of Edgar Sawtelle, this is a dramatic and deeply moving novel about an act of violence in a small Appalachian town and the repercussions that will forever change a young man's view of human cruelty and compassion.

After seeing the death of his younger brother in a terrible home accident, fourteen-year-old Kevin and his grieving mother are sent for the summer to live with Kevin's grandfather. In this town of Medgar, Kentucky, a peeled-paint coal town deep in Appalachia, Kevin quickly falls in with a half-wild hollow kid named Buzzy Fink who schools him in the mysteries and magnificence of the woods.

The town is beset by a massive mountaintop removal operation that is blowing up the hills and back filling the hollows. Kevin's grandfather and others in town attempt to rally the citizens against the "company" and its powerful owner to stop the plunder of their mountain heritage. But when Buzzy witnesses a brutal hate crime, a sequence is set in play that will test Buzzy and Kevin to their absolute limits in an epic struggle for survival in the Kentucky mountains.

Christopher Scotton is an experienced public speaker, seminar leader, online marketer and technology entrepreneur. After a stint as a venture capitalist, he joined his third start-up, a computer-aided design (CAD) software company, where he is currently President and CEO. Scotton is a recognized expert and frequent speaker on search engine marketing, search engine optimization, social media marketing and online lead generation.

"A page turner...What [Scotton] should be congratulated on is his willingness to tell a new story in an old neighborhood, to draw characters who are thoroughly human, and to create a story that leads to terror and redemption, love and survival." —The New York Times Book Review

"THE SECRET WISDOM OF THE EARTH is a marvelous debut...The setting, in the coal country of Appalachia, is rich in history and lore and tragedy. A young teenager comes of age under the wise counsel of his grandfather. An ugly murder haunts a small town. The story has everything a big, thick novel should have, and I hated to put it down."—John Grisham

"How marvelous to start the year of reading with Christopher Scotton's big-hearted THE SECRET WISDOM OF THE EARTH...In the world created by Scotton, Appalachia is more than verdant or hardscrabble... Scotton writes with deep understanding about how the mines eventually got played out and the impact of mountaintop removal... Evil may defy understanding, but in that inquiry into evil, this lovely novel brings readers closer."—The Chicago Tribune

"[A] pulse-quickening debut...Scotton tempers his Gothic tale with poignant insights into the crushing weight of loss...THE SECRET WISDOM OF THE EARTH melds beguiling characters with an urgent ecological message."—O Magazine

"The coming-of-age story is enriched by depictions of the earth's healing and redemptive power...makes for compelling reading when the action grows intense-managing, like the landscape it describes, to be simultaneously frightening and beautiful."—Publishers Weekly

"Scotton is a natural storyteller with a terrific knack for visiting trouble upon his characters and pushing them into confrontation...Not a page goes by without a threat, a promise, an action or a reckoning...expertly woven."—The Washington Post

"Christopher Scotton's first novel opens with such a grand sweep of language that I knew at once I was in the hands of a master storyteller. I was swept up in the drama of a boy watching his world come apart. The book is big as all get-out--human and warm, richly detailed, beautifully told, impossible to put down."—Mark Childress, author of Georgia Bottoms

"Violent and wonderfully tender...bittersweet...full of gorgeously rendered, intricately interwoven story threads...But it's Scotton's clear love of and respect for his subject--and his refusal to rely on cliches when describing Appalachia's humble people, their trials or their successes--that makes the novel so surprisingly uplifting at times, and profoundly rewarding."—San Francisco Gate

"A deeply moving story about human cruelty and compassion...wonderful...This book reminded me a little of Harper Lee's 'To Kill a Mockingbird'"—The Oklahoman

"With its hardscrabble setting and cast of burdened characters hemmed in by seemingly insurmountable circumstances, Scotton's violent and wonderfully tender novel speaks not only to a bevy of America's centuries-old troubles but also to our frustrated yet ardent attempts at fixing them."—San Francisco Gate

"A masterpiece...Scotton sketches a rainbow of humanity...splendid and hopeful. Scotton's undeniable love and awe for this region shine through as he painstakingly portrays strokes of beauty in man and nature...The belief that everyone can make a difference in even the smallest of efforts shines optimism in the bleakest corners of the novel."—Shelf Awareness

"The debut novel from Christopher Scotton weaves the impacts of mountaintop removal mining into a poignant story of humanity and healing."—Appalachian Voices

"Scotton's finely wrought characters, perfectly paced plot, and keen sense of place make THE SECRET WISDOM OF THE EARTHresonate with the reader long after the book has been finished."—Catherine Weller, Weller Book Works