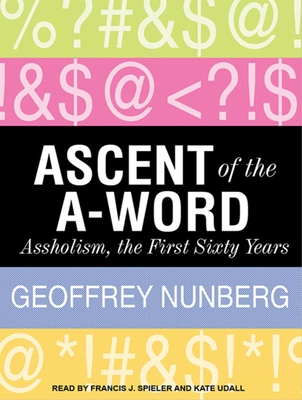 It first surfaced in the gripes of GIs during World War II and was captured early on by the typewriter of a young Norman Mailer. Within a generation it had become a basic notion of our everyday moral life, replacing older reproaches like lout and heel with a single inclusive category-a staple of country outlaw songs, Neil Simon plays, and Woody Allen movies. Feminists made it their stock rebuke for male insensitivity, the est movement used it for those who didn't get it, and Dirty Harry applied it evenhandedly to both his officious superiors and the punks he manhandled.The asshole has become a focus of collective fascination for us, just as the phony was for Holden Caulfield and the cad was for Anthony Trollope. From Donald Trump to Ann Coulter, from Mel Gibson to Anthony Weiner, from the reality TV prima donnas to the internet trolls and flamers, assholism has become the characteristic form of modern incivility, which implicitly expresses our deepest values about class, relationships, authenticity, and fairness. We have conflicting attitudes about the A-word-when a presidential candidate unwittingly uttered it on a live mic in 2000, it confirmed to some that he was a man of the people and to others that he was a boor. But considering how much the word does for us, and to us, it hasn't gotten nearly the attention it deserves-at least until now.

Renowned linguist Geoffrey Nunberg is the author of several nonfiction works, including "The Years of Talking Dangerously," "Going Nucla"r, and "Talking Right."

Kate Udall is an actor in New York City and an audiobook narrator. Her audiobooks include titles in Allison Brennan's Lucy Kincaid series.

Francis J. Spieler has been a journalist, essayist-critic, and literary agent, and is now an actor and narrator.

"A witty and politically charged analysis of a potent obscenity in its modern and contemporary context." ---Kirkus