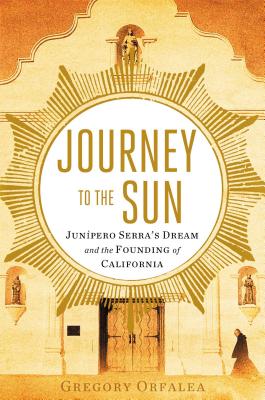 By Gregory Orfalea
for information about purchasing this book, please contact orders@bookpassage.com

The fascinating narrative of the remarkable life of Junípero Serra, the intrepid priest who led Spain and the Catholic Church into California in the 1700s and became a key figure in the making of the American West.

The fascinating narrative of the remarkable life of Junípero Serra, the intrepid priest who led Spain and the Catholic Church into California in the 1700s and became a key figure in the making of the American West

In the year 1749, at the age of thirty-six, Junípero Serra left his position as a highly regarded priest in Spain for the turbulent and dangerous New World, knowing he would never return. The Spanish Crown and the Catholic Church both sought expansion in Mexico—the former in search of gold, the latter seeking souls—as well as entry into the mysterious land to the north called “California.”

Serra’s mission: to spread Christianity in this unknown world by building churches wherever possible and by converting the native peoples to the Word of God. It was an undertaking that seemed impossible, given the vast distances, the challenges of the unforgiving landscape, and the danger posed by resistant native tribes. Such a journey would require bottomless physical stamina, indomitable psychic strength, and, above all, the deepest faith. Serra, a diminutive man with a stout heart, possessed all of these attributes, as well as an innate humility that allowed him to see the humanity in native people whom the West viewed as savages.

By his death at age seventy-one, Serra had traveled more than 14,000 miles on land and sea through the New World—much of that distance on a chronically infected and painful foot—baptized and confirmed 6,000 Indians, and founded nine of California’s twenty-one missions, with his followers establishing the rest. The names of these missions ring through the history of California— San Diego, San Jose, San Juan Capistrano, Santa Clara, and San Francisco—and served as the epicenters of the arrival of Western civilization, where millions more would follow, creating the California we know today.

An impoverished son, an inspired priest, and a potent political force, Serra was a complex man who stood at the historic crossroads between Native Americans, the often brutal Spanish soldiers, and the dictates of the Catholic Church, which still practiced punishment by flogging. In this uncertain, violent atmosphere, Serra sought to protect the indigenous peoples from abuse and to bring them the rituals and spiritual comfort of the Church even as the microbes carried by Europeans threatened their existence.

Beginning with Serra’s boyhood on the isolated island of Mallorca, venturing into the final days of the Spanish Inquisition, revealing the thriving grandeur of Mexico City, and finally journeying up the untouched California coast, Gregory Orfalea’s magisterial biography is a rich epic that cuts new ground in our understanding of the origins of the United States.

Combining biography, European history, knowledge of Catholic doctrine, and anthropology, Journey to the Sun brings original research and perspective to America’s creation story. Orfalea’s poetic and incisive recounting of Serra’s life shows how one man changed the future of California and in so doing affected the future of our nation.

Gregory Orfalea was born and raised in Los Angeles, California, and educated at Georgetown University and the University of Alaska. He has held teaching positions at Georgetown, The Claremont Colleges, and at Westmont College. Orfalea is the author and editor of eight books, the most recent of which are the short story collection The Man Who Guarded the Bomb and Angeleno Days, which won the 2010 Arab American Book Award and has been named a Finalist for the PEN USA Award in Creative Nonfiction.

"A popular, highly readable history of an important figure...Orfalea's book is polished and professional."
— LA Times

"A California story becomes an American story...[a] passionate resurrection of the largely forgotten Spanish Franciscan priest who founded the early missions along the California coast...this sympathetic portrait of the well-meaning though flawed priest...sifts carefully through the record...A doggedly researched and fulsomely argued biography."
— Kirkus

“One merely has to look at the place names in modern California to confirm the enduring legacy of the Spanish colonization of the area. To a great extent, the initial success of that effort was due to the labors of the Franciscan priest Junipero Serra. This admiring and admirable biography pays tribute to an essential figure in the early development of California.”
— Booklist

“Journey to the Sun is a highly readable, interpretive account of Junipero Serra's life. Gregory Orfalea brings his vast breadth of knowledge to fleshing out a humanistic narrative of a man whose history is often distorted and confounding. A brilliant biography about a key Hispanic figure in the launching of American history.”
— Daniel E. Krieger, Professor of History, Emeritus, California Polyte

“Orfalea's riveting narrative significantly enriches our grasp of the illusive and controverted Junipero Serra with delightful episodes from his life in Spain and Mexico based on the author's painstaking research never before reported. Arguably, Serra comes alive in this volume as in no other. Great story-telling and fast-moving action together with a stupendous familiarity with the bibliography on Serra make this an original and substantive addition to the field. Scholars and the general public will find this volume enlightening and a good read.”
— Allan Figueroa Deck, SJ, Casassa Chair and Professor of Theological Studies, Loyola Marymount University

“Orfalea's lively and engaging narrative not only humanizes Junipero Serra, but just as important takes into consideration the cultural perspectives of California Indians as they engaged the Spanish colonial world.”
— John R. Johnson, Ph.D., Curator of Anthropology, Santa Barbara Museum of Natural History

"A California story becomes an American story...[a] passionate resurrection of the largely forgotten Spanish Franciscan priest who founded the early missions along the California coast...this sympathetic portrait of the well-meaning though flawed priest...sifts carefully through the record...A doggedly researched and fulsomely argued biography."
— Kirkus