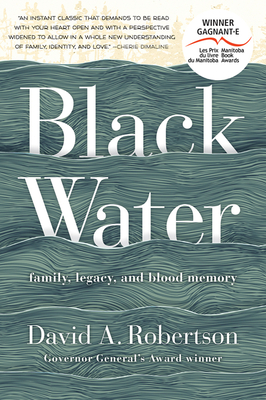 “An instant classic that demands to be read with your heart open and with a perspective widened to allow in a whole new understanding of family, identity and love.” —Cherie Dimaline

In this bestselling memoir, a son who grew up away from his Indigenous culture takes his Cree father on a trip to the family trapline and finds that revisiting the past not only heals old wounds but creates a new future

The son of a Cree father and a white mother, David A. Robertson grew up with virtually no awareness of his Indigenous roots. His father, Dulas—or Don, as he became known—lived on the trapline in the bush in Manitoba, only to be transplanted permanently to a house on the reserve, where he couldn’t speak his language, Swampy Cree, in school with his friends unless in secret. David’s mother, Beverly, grew up in a small Manitoba town that had no Indigenous people until Don arrived as the new United Church minister. They married and had three sons, whom they raised unconnected to their Indigenous history.

David grew up without his father’s teachings or any knowledge of his early experiences. All he had was “blood memory”: the pieces of his identity ingrained in the fabric of his DNA, pieces that he has spent a lifetime putting together. It has been the journey of a young man becoming closer to who he is, who his father is and who they are together, culminating in a trip back to the trapline to reclaim their connection to the land.

Black Water is a memoir about intergenerational trauma and healing, about connection and about how Don’s life informed David’s own. Facing up to a story nearly erased by the designs of history, father and son journey together back to the trapline at Black Water and through the past to create a new future.

DAVID A. ROBERTSON is the winner of the Beatrice Mosionier Aboriginal Writer of the Year Award, the John Hirsch Award for Most Promising Manitoba Writer and the TWUC Freedom to Read Award. His books include The Barren Grounds: The Misewa Saga; When We Were Alone (winner of the Governor General’s Award, a finalist for the TD Canadian Children’s Literature Award and a McNally Robinson Best Book for Young People); Will I See? (winner of the Manuela Dias Book Design and Illustration Award, graphic novel category); and the YA novel Strangers (recipient of the Michael Van Rooy Award for Genre Fiction). He is the creator and host of the podcast Kiwew. Through his writings about Canada’s Indigenous peoples, Robertson educates as well as entertains, reflecting Indigenous cultures, histories and communities while illuminating many contemporary issues. David A. Robertson is a member of Norway House Cree Nation. He lives in Winnipeg.

“This is the book I never knew I was waiting for but my whole body recognized when I read it. Black Water is mesmerizing, difficult, inviting, and tremendously gorgeous. It is a love letter about coming home. We are all better people because of the journey David took with his dad and I am forever grateful for having been allowed to accompany them. David A. Robertson is a treasure: kind, honest, and a master of storytelling. This is him at his best, and while I’m not sure we deserve him, we sure as hell need him.”
— Cherie Dimaline, bestselling author of The Marrow Thieves and Empire of Wild

“When someone lives their life in a good way, the Haisla call them handsome people. David A. Robertson’s biography is the perfect example of someone who takes care with his words and speaks respectfully; he tackles identity and racism, family bonds and breaks, with nuance and honesty. The power of this approach makes Black Water an essential and timely book.”
— Eden Robinson, bestselling author of The Trickster Trilogy

“David A Robertson's memoir is rich in lore and insight and compassion. He explores Cree values and ideas and their richness and relevance in contemporary life. He does so by taking us through the story of one Indigenous family's journey through the twentieth century in Canada. We are faced with horrors and great loss, but also extraordinary warmth and heroics and a family who refused to ever be defined by anyone but themselves. A wondrous history lesson about love.”
— Heather O’Neill, award-winning author of The Lonely Hearts Hotel

“Black Water is a deeply moving book about “[t]he experiences of one generation felt by the next, and the next after that… engrained in us through the stories we pass down as gifts.” David A. Robertson writes of kinship and his father with enormous care, heart, and courage.”
— David Chariandy, acclaimed author of Brother and I’ve Been Meaning to Tell You

“A story is a gift, and with Black Water, David A. Robertson is at his most generous. He shares, with candour and tenderness, a personal story of father-son love, deftly weaving it into a larger social and political history of loss, trauma, survival and resurgence. At once intimate and expansive, this is a story of healing and home.”
— Rachel Giese, author of Boys: What it Means to Become a Man

"An honest and moving memoir that builds an emotional crescendo . . . .A richly revealing account that is revealing yet respectful."
— Galleries West

"I found this book really brave, beautiful and nuanced in its exploration of indigenous identity, generational trauma and blood memory. The narrator has a keen eye that he is not at all afraid to turn on himself, balancing recrimination and self-implication, rage and forgiveness. When David's father says "I didn't want to tell you how to be an indigenous man because you are an indigenous man," we are deeply moved, even as the book has led us to believe that is not quite a good enough answer. That's what I mean by nuanced. There are no easy solutions to the problem of indigenous identity in the face of a racist nation and 500 years of genocide. There are only fathers and sons, finding their way along a trap line."