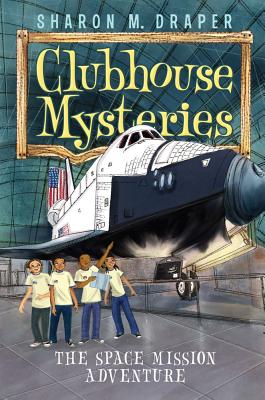 This is book number 4 in the Clubhouse Mysteries series.

In this fourth book of the classic chapter book series by award-winning author Sharon M. Draper, four boys who call themselves the Black Dinosaurs go to space camp!

Ziggy and his friends can’t wait for space camp, where they’ll get to learn about weightlessness and how astronauts eat—and use the bathroom—in space! But Ziggy has another goal: he wants to meet some aliens. Purple, three-headed Martians, preferably, just like in his Mega Mighty Martian Blaster game.

Once he gets to camp, Ziggy learns that real-life space travel is even more exciting than what he imagined. But when a mysterious, shiny stone appears, Ziggy can’t help but wonder if his dream of alien contact has just come true...