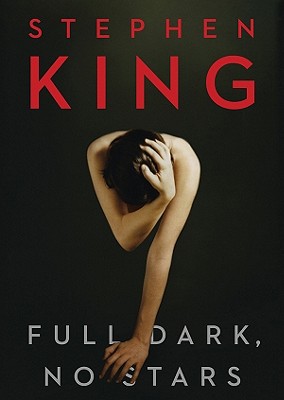 By Stephen King, Craig Wasson (Read by), Jessica Hecht (Read by)
for information about purchasing this book, please contact orders@bookpassage.com

“The pages practically turn themselves” (USA TODAY) in Full Dark, No Stars, an unforgettable collection centered around the theme of retribution.

In “1922,” a violence awakens inside a man when his wife proposes selling off the family homestead, setting in motion a grisly train of murder and madness.

In “Big Driver”, a mystery writer is brutally assaulted by a stranger along a Massachusetts back road and plots a revenge that will bring her face-to-face with another stranger: the one inside herself.

In “Fair Extension,” making a deal with the devil not only saves a man from terminal illness but also provides rich recompense for a lifetime of resentment.

In “A Good Marriage,” the trust forged by more than twenty years of matrimony is irrevocably shattered when a woman makes a chance discovery leading to the horrifying implications of just who her husband really is.

Like Different Seasons and Four Past Midnight, which generated such enduring hit films as The Shawshank Redemption and Stand by Me, King’s Full Dark, No Stars is a “page-turner” (The New York Times) “as gripping as his epic novels” (St. Louis Post-Dispatch), and “an extraordinary collection, thrillingly merciless, and a career high point” (The Telegraph, UK).

Stephen King is the author of more than sixty books, all of them worldwide bestsellers. His recent work includes Billy Summers, If It Bleeds, The Institute, Elevation, The Outsider, Sleeping Beauties (cowritten with his son Owen King), and the Bill Hodges trilogy: End of Watch, Finders Keepers, and Mr. Mercedes (an Edgar Award winner for Best Novel and a television series streaming on Peacock). His novel 11/22/63 was named a top ten book of 2011 by The New York Times Book Review and won the Los Angeles Times Book Prize for Mystery/Thriller. His epic works The Dark Tower, It, Pet Sematary, and Doctor Sleep are the basis for major motion pictures, with It now the highest-grossing horror film of all time. He is the recipient of the 2020 Audio Publishers Association Lifetime Achievement Award, the 2018 PEN America Literary Service Award, the 2014 National Medal of Arts, and the 2003 National Book Foundation Medal for Distinguished Contribution to American Letters. He lives in Bangor, Maine, with his wife, novelist Tabitha King.