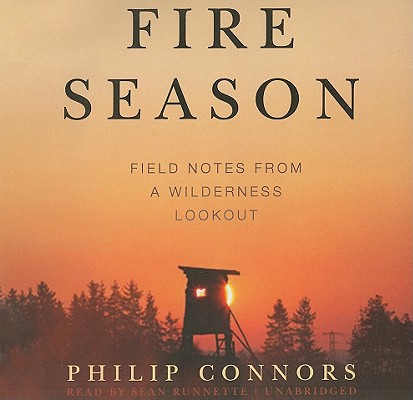 By Philip Connors, Sean Runnette (Read by)
for information about purchasing this book, please contact orders@bookpassage.com

“In elegant and measured prose, Connors broadens and enriches the whole tradition of nature writing with his own unique experience in the great wilderness. As fire lookout in New Mexico's Gila National Forest, Connors takes the reader inside his own musings and reveals his intimacy with the remote area, its flora and fauna, and inevitably, with its fires. His larger purpose is to reveal the behavior of fire and its crucial role in a healthy ecosystem, as well as to examine our complex relationship with it. A graceful, memorable book.”
— Marie du Vaure, Copperfield's Books, Sebastopol, CA

In the tradition of Desert Solitaire and Shop Class as Soulcraft, this is a remarkable debut from a major new voice in American nonfiction--a meditation on nature and life, witnessed from the heights of one of the last fire-lookout towers in America.

For nearly a decade, Philip Connors has spent half of each year in a seven-by-seven foot fire-lookout tower, ten thousand feet above sea level in one of the most remote territories of New Mexico. One of the least developed parts of the country, the first region designated as an official wilderness area in the world, the section he tends is also one of the most fire-prone, suffering more than thirty thousand lightning strikes each year. Written with gusto, charm, and a sense of history, Fire Season captures the wonder and grandeur of this most unusual job and place: the eerie pleasure of solitude, the strange dance of communion and mistrust with its animal inhabitants, and the majesty, might, and beauty of untamed fire at its wildest.

Connors' time up on the peak is filled with drama--there are fires large and small; spectacular midnight lightning storms and silent mornings awakening above the clouds; surprise encounters with long-distance hikers, smokejumpers, bobcats, black bears, and an abandoned, dying fawn.

Filled with Connors' heartfelt reflections on our place in the wild, on other writers who have worked as lookouts--Jack Kerouac, Edward Abbey, Norman Maclean, Gary Snyder--and on the ongoing debate over whether fires should be suppressed or left to burn, Fire Season is a remarkable homage to the beauty of nature, the blessings of solitude, and the freedom of the independent spirit.

As Connors writes, "I've seen lunar eclipses and desert sandstorms and lightning that made my hair stand on end...I've watched deer and elk frolic in the meadow below me and pine trees explode in a blue ball of smoke. If there's a better job anywhere on the planet, I'd like to know what it is."