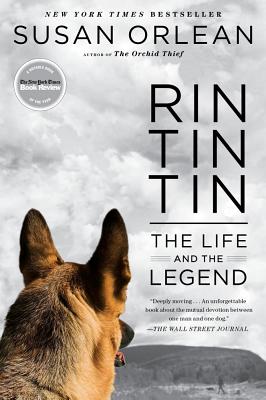 “This is the story of a young man whose fateful journey collides with that of a battlefield puppy, setting into motion an extraordinary tale of devotion. Beginning with a tale of redemption, Orlean unfolds a riveting account of the history of both the German shepherd, whose breed exemplifies the good-natured qualities that have made dog and human relationships unparalleled in society, and of early American movie making. The result is a wonderful odyssey beautifully depicting loyalty and friendship in a remarkable history lesson and an entertaining read.”
— Megan Bruce, Watermark Books, Wichita, KS

“This is the story of a young man whose fateful journey collides with that of a battlefield puppy, setting into motion an extraordinary tale of devotion. Beginning with a tale of redemption, Orlean unfolds a riveting account of the history of both the German shepherd, whose breed exemplifies the good-natured qualities that have made dog and human relationships unparalleled in society, and early American movie making. The result is a wonderful odyssey beautifully depicting loyalty and friendship in a remarkable history lesson and an entertaining read.”
— Megan Bruce, Watermark Books, Wichita, KS

He believed the dog was immortal.

So begins Susan Orlean’s sweeping, powerfully moving account of Rin Tin Tin’s journey from orphaned puppy to movie star and international icon. Orlean, a staff writer at The New Yorker who has been hailed as “a national treasure” by The Washington Post, spent nearly ten years researching and reporting her most captivating book to date: the story of a dog who was born in 1918 and never died.

It begins on a battlefield in France during World War I, when a young American soldier, Lee Duncan, discovered a newborn German shepherd in the ruins of a bombed-out dog kennel. To Duncan, who came of age in an orphanage, the dog’s survival was a miracle. He saw something in Rin Tin Tin that he felt compelled to share with the world. Duncan brought Rinty home to California, where the dog’s athleticism and acting ability drew the attention of Warner Bros. Over the next ten years, Rinty starred in twenty-three blockbuster silent films that saved the studio from bankruptcy and made him the most famous dog in the world. At the height of his popularity, Rin Tin Tin was Hollywood’s number one box office star.

During the decades that followed, Rinty and his descendants rose and fell with the times, making a tumultuous journey from silent films to talkies, from black-and-white to color, from radio programs to one of the most popular television shows of the baby boom era, The Adventures of Rin-Tin-Tin. The canine hero’s legacy was cemented by Duncan and a small group of others—including Bert Leonard, the producer of the TV series, and Daphne Hereford, the owner of the current Rin Tin Tin—who have dedicated their lives to making sure the dog’s legend will never die.

At its core, Rin Tin Tin is a poignant exploration of the enduring bond between humans and animals. It is also a richly textured history of twentieth-century entertainment and entrepreneurship. It spans ninety years and explores everything from the shift in status of dogs from working farmhands to beloved family members, from the birth of obedience training to the evolution of dog breeding, from the rise of Hollywood to the past and present of dogs in war. Filled with humor and heart and moments that will move you to tears, Susan Orlean’s first original book since The Orchid Thief is an irresistible blend of history, human interest, and masterful storytelling—a dazzling celebration of a great American dog by one of our most gifted writers.

Susan Orlean has been a staff writer at The New Yorker since 1992. She is the author of seven books, including Rin Tin Tin, Saturday Night, and The Orchid Thief, which was made into the Academy Award–winning film Adaptation. She lives with her family and her animals in upstate New York and may be reached at SusanOrlean.com and Twitter.com/SusanOrlean.

“Fascinating . . . The sweeping story of the soulful German shepherd who was born on the battlefields of World War I, immigrated to America, conquered Hollywood, struggled in the transition to the talkies, helped mobilize thousands of dog volunteers against Hitler and himself emerged victorious as the perfect family-friendly icon of cold war gunslinging, thanks to the new medium of television. . . . Do dogs deserve biographies? In Rin Tin Tin Susan Orlean answers that question resoundingly in the affirmative . . . By the end of this expertly told tale, she may persuade even the most hardened skeptic that Rin Tin Tin belongs on Mount Rushmore with George Washington and Teddy Roosevelt, or at least somewhere nearby with John Wayne and Seabiscuit.” —Jennifer Schuessler, front cover of The New York Times Book Review

“Remarkable . . . Orlean’s pursuit of detail is mind-boggling. . . . The book is less about a dog than the prototypes he embodied and the people who surrounded him. It is about story-making itself, about devotion, luck and heroes. . . . Ultimately, the reader is left well nourished and in awe of both Orlean’s reportorial devotion and at her magpie ability to find the tiniest sparkling detail." —Alexandra Horowitz, San Francisco Chronicle

“Deeply moving . . . An unforgettable book about the mutual devotion between one man and one dog.” —Scott Eyman, The Wall Street Journal

“Dazzling . . . Susan Orlean has fashioned a masterpiece of reporting and storytelling, some of it quite personal and all of it compelling. Animal-related books have always peppered best-seller lists—Seabiscuit comes quickly to mind—and this one will top such lists. It deserves to, and also to work its way into millions of hearts and minds. . . . [Carl] Sandburg called Rin Tin Tin ‘thrillingly intelligent’ and ‘phenomenal.’ The same can be said for this remarkable book. . . . Spectacular.” —Chicago Tribune

“Epic . . . Heartfelt . . . An enormously satisfying story about a dog and the man who believed in him.” —Carol Memmott, USA Today

“Stunning . . . A book so moving it melted the heart of at least this one dogged Lassie lover . . . Don’t let the book’s title fool you. Calling Rin Tin Tin the story of a dog is like calling Moby-Dick the story of a whale. Orlean surfs the tide of time, pushing off in the 1900s and landing in the now, delivering a witty synopsis of nearly a century of Rin Tin Tins and American popular culture. The result is a truly exceptional book that marries historical journalism, memoir, and the technique of character-driven, psychologically astute, finely crafted fiction: a whole far greater than the sum of its parts.” —Meredith Maran, The Boston Globe

“It's a story of magnificent obsession. Nearly a decade in the making, combining worldwide research with personal connection, it offers the kind of satisfactions you only get when an impeccable writer gets hold of one heck of a story. . . . Deft . . . Insightful . . . Fascinating.” —Kenneth Turan, Los Angeles Times

“Susan Orlean has written a book about how an orphaned dog became part of millions of households, and hearts, in a way that may reveal the changing bonds between humans and animals, too. . . . One of the many pleasures of this book is the historical breadth of the story.” —Scott Simon, NPR’s Weekend Edition

“An improbably fascinating tale of one of the first canine celebrities, the times that catapulted him to fame, and the legacy that endures.” —People magazine’s “Great Fall Reads”

“Brilliant . . . Orlean, a staff writer for The New Yorker, earned considerable critical praise for her 1998 book The Orchid Thief. But if there were any book she was born to write, it's this one. The product of years of dogged research, it's her magnum opus, a work filled with fascinating stories . . . [and] stunning prose that is both compassionate and perceptive.” —Michael Schaub, NPR

“Engrossing . . . Delightful . . . Olean finds much more to the story than a man and his dog . . . . Its heart lies in her exploration of how a dog could come to embody the ideal of heroic devotion and, eventually, exist as an icon outside the boundaries of time.” —Douglass K. Daniel, The Associated Press

“Orlean relates the histories of the original Rin Tin Tin and his various successors with her customary eye for captivating detail.” —Entertainment Weekly

“Rapturous . . . This dog’s eye history of Hollywood in the 1920s is exuberant and told with as much energy as love. . . . It is to be numbered among the best Hollywood biographies.” —David Thomson, The New Republic

“Fascinating . . . Orlean’s deadpan sense of humor and ear for the odd and beguiling fact make it hard to put down the book. But there’s also something haunting about it, a sense of the brevity of life and fame. . . . Orlean’s writing is built to last. As individual as a fingerprint, or a face, it turns what could have been a footnote to history into a touching account of the way one life resonates with others.” —Margaret Quamme, The Columbus Dispatch

“Rin Tin Tin is a tale of devotion . . . [and] an eloquent, powerful inquiry into ‘how we create heroes and what we want from them,’ and about what endures in our culture. . . . Orlean’s book runs much deeper than Baby Boomer nostalgia. . . . Orlean manages to surprise us repeatedly.” —Heller McAlpin, The Christian Science Monitor


“It is a book that is best read in solitude, or at least in the company of someone who won't be annoyed when you speak up every few moments to share some fascinating fact that Orlean has uncovered, which she does on nearly every page.” —Robert Philpot, Fort Worth Star-Telegram

“Rin Tin Tin was more than a dog. He embodied the core paradoxes of the American ideal: He was a loner who was also a faithful companion, a brave fighter who was also vulnerable. I was astonished to learn from this delightful book that he has existed for eleven generations over a century. By chronicling his amazing ups and downs, Susan Orlean has produced a hugely entertaining and unforgettable reading experience.” —Walter Isaacson, author of Steve Jobs

“Not only does Susan Orlean give us a fascinating and big-hearted account of all the many incarnations of Rin Tin Tin, she shows us the ever-changing role of American dogs in times of war and peace. This book is for anyone who has ever had a dog or loved a dog or watched a dog on television or thought their dog could be a movie star. In short—everyone.” —Ann Patchett, author of State of Wonder and Bel Canto

“I adored this book. It weaves history, war, show business, humanity, wit, and grace into an incredible story about America, the human-animal bond, and the countless ways we would be lost without dogs by our sides, on our screens, and in our books. This is the story Susan Orlean was born to tell—it’s filled with amazing characters, reporting, and writing.” —Rebecca Skloot, author of The Immortal Life of Henrietta Lacks

“Move over Seabiscuit, Rin Tin Tin will be the most-talked-about animal hero of the year and beyond. . . A spectacularly compelling portrait . . . Engrossing, dynamic, and affecting." —Booklist (starred review)

“[Orlean] combines all her skills and passions in this astonishing story . . . A terrific dog’s tale that will make readers sit up and beg for more.” —Kirkus Reviews (starred review)

“Stirring . . . A tale of passion and dedication overcoming adversity. . . . Even readers coming to Rin Tin Tin for the first time will find it difficult to refrain from joining Duncan in his hope that Rin Tin Tin’s legacy will ‘go on forever.’” —Publishers Weekly