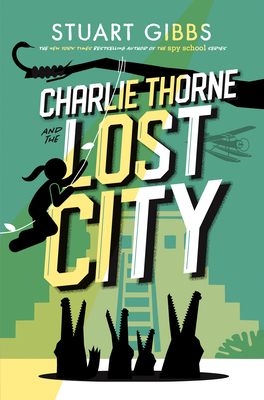 By Stuart Gibbs
for information about purchasing this book, please contact orders@bookpassage.com

“Twelve-year-old, super-smart super spy and extreme sportswoman Charlie Thorne is at it again in this heart-thumping sequel! This time, she’s in South America racing her way through the Amazon rainforest to track down the priceless treasure Charles Darwin left behind before it’s found by a ruthless KGB agent and a team of Italian siblings who’ve been looking for this treasure their whole lives. Pick this book up only if you’re ready to feel sweat on your brow and your heart beating in your chest when you’re transported into the biggest rainforest in the world to follow Charlie’s adventure.”
— Ali Teague, Bookworm of Edwards, Edwards, CO

In this sequel to the New York Times bestselling Charlie Thorne and the Last Equation--which #1 New York Times bestselling author Chris Grabenstein called "a real page-burner"--Charlie searches for Charles Darwin's hidden treasure in South America. Charlie Thorne is a genius.
Charlie Thorne is a fugitive.
Charlie Thorne isn't even thirteen. After saving the world, Charlie is ready to take it easy in the Galapagos Islands. That is, until she's approached by the mysterious Esmeralda Castle, who has a code she knows only Charlie can decipher. In 1835, Charles Darwin diverted his ship's journey so he could spend ten months in South America on a secret solo expedition. When he returned, he carried a treasure that inspired both awe and terror in his crew. Afterward, it vanished, never to be seen again... But Darwin left a trail of clues behind for those brave and clever enough to search for it. Enter Charlie Thorne. In a daring adventure that takes her across South America, Charlie must crack Darwin's 200-year-old clues to track down his mysterious discovery--and stay ahead of the formidable lineup of enemies who are hot on her tail. When an ancient hidden treasure is at stake, people will do anything to find it first. Charlie may be a genius, but is she smart enough to know who she can trust?

Stuart Gibbs is the New York Times bestselling author of Charlie Thorne and the Last Equation and the FunJungle, Spy School, and Moon Base Alpha series. He has written the screenplays for movies like See Spot Run and Repli-Kate, worked on a whole bunch of animated films, and developed TV shows for Nickelodeon, Disney Channel, ABC, and Fox. Stuart lives with his family in Los Angeles. You can learn more about what he's up to at StuartGibbs.com.