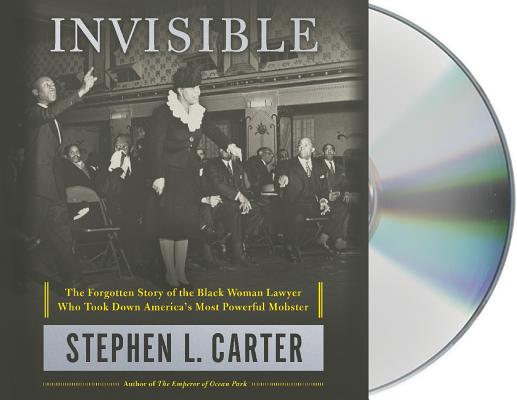 Bestselling author Stephen L. Carter delves into his past and retrieves the inspiring story of his grandmother’s extraordinary life.

Eunice Hunton Carter, Stephen Carter’s grandmother, was raised in a world of stultifying expectations about race and gender, yet by the 1940s, her professional and political successes had made her one of the most famous black women in America. But her triumphs were shadowed by prejudice and tragedy. Greatly complicating her rise was her difficult relationship with her younger brother, Alphaeus, an avowed Communist who—together with his friend Dashiell Hammett—would go to prison during the McCarthy era. Yet she remained unbowed.

Moving, haunting, and as fast-paced as fiction, Invisible tells the true story of a woman who often found her path blocked by the social and political expectations of her time. But Eunice Carter never accepted defeat, and thanks to her grandson’s remarkable audiobook, her long forgotten story is once again visible.

Karen Chilton is a multi-talented author, actor, and audiobook narrator, as well as a freelance writer, script writer, and librettist. She wrote the biography Hazel Scott about the trailblazing jazz pianist and coauthored I Wish You Love with legendary jazz vocalist Gloria Lynne. Her acting credits include It's Kind of a Funny Story and Half Nelson. She won a New Professional Theatre Writers award for her play Convergence and an Audiofile Golden Earphones Award for her narration of Karolyn Smardz Frost's I've Got a Home in Glory Land. She has also narrated Michelle Alexander's The New Jim Crow and Jennifer Berry Hawes' Grace Will Lead Us Home: The Charleston Church Massacre and the Hard, Inspiring Journey to Forgiveness.

This is a listen you'd be forgiven for thinking is a work of fiction. As narrated by Karen Chilton, the real-life story of Manhattan District Attorney Eunice Carter is remarkable--both in its telling and in its history. Carter was an activist, an attorney, and one of the most notable women of her time, a time when few women worked outside the home, let alone became professionals...listening to Chilton's narration, you'll be enthralled with the author's research and his grandmother's amazing life." -AudioFile

"A really good biography, not only about Eunice Hunton Carter but that also delves into US history of racism and intersectional feminism." -BookRiot