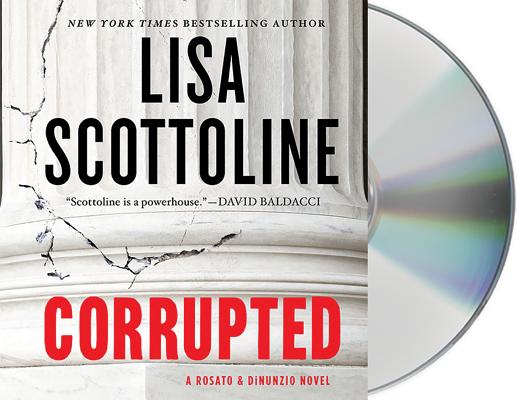 By Lisa Scottoline, Kate Burton (Read by)
for information about purchasing this book, please contact orders@bookpassage.com

In Lisa Scottoline's Corrupted, Bennie Rosato, the founder of the Rosato & DiNunzio law firm, hides her big heart beneath her tough-as-nails exterior and she doesn't like to fail.

Now, a case from her past shows her how differently things might have turned out. Thirteen years ago, Bennie Rosato took on Jason Leftavick, a twelve-year-old boy who was sent to a juvenile detention center after fighting a class bully. Bennie couldn't free Jason, and to this day it's the case that haunts her. Jason has grown up in and out of juvenile prison, and his adulthood hasn't been any easier. Bennie no longer represents those accused of murder, but when Jason is indicted for killing the same bully he fought with as a kid, she sees no choice but to represent him. She doesn't know whether or not to believe his claims of innocence, but she knows she owes him for past failures-of the law, of the juvenile justice system, and of herself. Forced to relive the darkest period of her life, Bennie will do everything in her power to get the truth, and justice.

Tony-award nominee  Kate Burton has appeared on Broadway in The Constant Wife, The Cherry Orchard, Spring Awakening, Hedda Gabler, and The Grand Manner.  She played the title role in Alice in Wonderland with her father, Richard Burton, on PBS. She was featured on Grey’s Anatomy as the title character’s mother, Ellis Grey and has also appeared in Law & Order, The Practice, The West Wing, and Judging Amy.  Kate earned a bachelor's degree in Russian studies and European history from Brown University in 1979 and was awarded an honorary doctorate from Brown University in 2007.  She has narrated numerous audiobooks, including works by Patricia Cornwell, Lisa Scottoline, Iris Johansen, and Barbara Taylor Bradford.