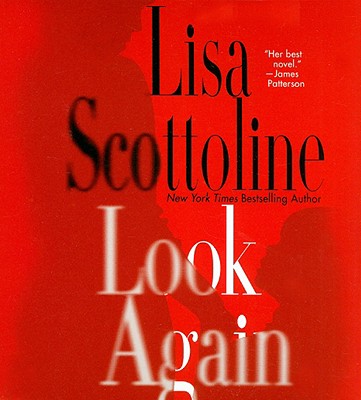 By Lisa Scottoline, Mary Stuart Masterson (Read by)
$39.95
Email or call for price

When reporter Ellen Gleeson gets a "Have You Seen This Child?" flyer in the mail, she almost throws it away. But something about it makes her look again, and her heart stops the child in the photo is identical to her adopted son, Will. Her every instinct tells her to deny the similarity between the boys, because she knows her adoption was lawful. But she's a journalist and won't be able to stop thinking about the photo until she figures out the truth. And she can't shake the question: if Will rightfully belongs to someone else, should she keep him or give him up? She investigates, uncovering clues no one was meant to discover, and when she digs too deep, she risks losing her own life and that of the son she loves.

Lisa Scottoline breaks new ground in "Look Again," a thriller that's both heart-stopping and heart-breaking, and sure to have new fans and book clubs buzzing.

LISA SCOTTOLINE is the "New York Time"s bestselling author of 15 novels including "Lady Killer "and "Daddy's Girl." She also writes a weekly column titled, Chick Wit, for the Philadelphia Inquirer. She won an Edgar(r) Award and "Cosmopolitan "magazine's "Fun Fearless Fiction" Award. She lives in the Philadelphia area.

MARY STUART MASTERSON narrates "Look Again." She is an accomplished screen and stage actress perhaps most recognized for her roles in films such as "Fried Green Tomatoes, Benny & Joon, "and "Bed of Roses." She is married to actor Jeremy Davidson.

"Mary Stuart Masterson's precise diction builds suspense in this tale of a reporter investigating a missing-child case that may be linked to her own adopted son." -- As part of People magazine's "Three Reasons to Plan That Road Trip" "As skillful as Scottoline's thriller is, it is enhanced by Mary Stuart Masterson's performance. Her characterizations are distinct and evocative, her tone remains smooth, even while ratcheting up the tension and suspense. Listeners will be wholly absorbed by this moving story."--Publishers Weekly "Narrated by actress Mary Stuart Masterson, Look Again is a suspenseful story that tugs at the heart, as listeners follow Ellen’s determined search to uncover Will’s mysterious history, raising questions of where he belongs—and who he belongs to."--Kirkus Reviews "Not many audios make you drive out of your way just to keep the disks turning. This is one: suspenseful, believable, thought-provoking and, yes, thrilling." - The Dallas Morning News "Actress Mary Stuart Masterson's warm, precise voice enlists the listener's sympathy for Ellen, even in her most boneheaded, self-sabotaging moments, and also provides convincing accents for the secondary characters." -- AudioFile "Ms. Masterson's... voicing of Will was perfect, and editor Marcello's voice was swoon worthy." -- Deadly Pleasures "Well-known film star Masterson reads the heart-wrenching story with a quiet confidence that belies Ellen's struggles... The story deals with a gripping moral dilemma, and Masterson pulls listeners in quite masterfully." -- Booklist